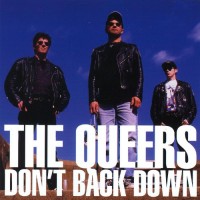 Joe Queer (King) has never been bashful about wearing his love of Brian Wilson on his sleeve. Heâ€™s long claimed that it was always his intention for The Queers to sound like a cross between the Ramones and the Beach Boys. Up until Donâ€™t Back Down, Queersâ€™ albums were largely obnoxious Ramones style tracks with a handful of poppy love songs sprinkled in. On Donâ€™t Back Down he threw caution to the wind and fully embraced the breezy Southern California surf sound. Hell, the title track was even a Beach Boys cover. King also acknowledges that the previous couple of albums had been a bit lackluster, and he felt like he really had to deliver a great LP.

Donâ€™t Back Down opened with the upbeat â€œNo Titâ€. It was the middle song in the â€˜Tit Trilogyâ€™ that also includes â€œUrsula Finally Has Titsâ€ (1993) and â€œTit Fuckâ€ (2010). It was a crude sing along classic that has remained a live staple. There were a few more fast punk songs spread across the album. There was the anti-social â€œIâ€™m OK, Youâ€™re Fuckedâ€. There was the memorable alcohol fueled anthem â€œI Only Drink Budâ€. (I only drink Bud when I go see The Queers. Itâ€™s become sort of a Rocky Horror Picture Show type ritual with me.) There was also the hostile â€œBrush Your Teethâ€ and the self deprecating masterpiece â€œBorn to do Dishesâ€.

â€œDonâ€™t Back Downâ€ was only the first of the recordâ€™s five cover songs. â€œSidewalk Surfer Girlâ€ was originally done by an obscure band called The Hondells way back in 1965. â€œLittle Hondaâ€ was another Beach Boys song from 1964. (It was about the newly imported motorcycles, not your Accord, pinko.) Ironically, The Hondells also covered little â€œLittle Hondaâ€ and had a bigger hit with it than the Beach Boys. Both â€œDonâ€™t Back Downâ€ and â€œLittle Hondaâ€ appeared on the same EP, Four by the Beach Boys. (â€œWendyâ€, famously covered by the Descendents on their 1986 LP Enjoy! was also on this influential little record.) These songs served to prove that The Queers were fully capable of pulling off complex vocal arrangements. Even if they involved ball squeezing falsettos and three part harmonies.

The other two covers were by contemporaries and could have easily passed for Queers originals. â€œAnother Girlâ€ (The Catalogs, 1993) and â€œEnd It All Nowâ€ (The Muffs, 1995) were important additions to the album. The band also brought in former Queersâ€™ member JJ Rassler to help with production, guitar and songwriting. He (along with King) contributed â€Number Oneâ€ , â€œJanelle, Janelleâ€ and â€œNever Everâ€. He also co-wrote â€œI Canâ€™t Get Over Youâ€ with King and Lisa Marr from Cub. Marr and King sang it as a duet and itâ€™s one of the bandâ€™s most enduring love songs. King readily admits that the album wouldnâ€™t have been as good without their contributions.

The rest of Donâ€™t Back Down was further proof that King was one of the greatest songwriters of the greatest era of pop-punk. â€œPunk Rock Girlsâ€ added some sunny organ, had a sugary sweet chorus and has remained a live favorite. â€œI Always Knewâ€ was a catchy love song that felt like it could have been transported from 60â€™s AM radio. â€œLove Love Loveâ€ was supposedly written by King for the Ramones, although they never recorded it. It was also one of the albumâ€™s more aggressive songs. It was a cautionary tale about a romance gone bad and it was definitely in the style of the Ramones.

Donâ€™t Back Down was significant for reasons beyond its wonderful music. It was the last Queers album for Lookout! Records before they made the ill advised leap to Hopeless. They would return for one more LP (Pleasant Screams) in 2002, but rescinded their master rights in 2006 as the label was dying a slow and painful death. (They shut down for good in 2012.) The six albums The Queers made for Lookout! were reissued by Asian Man in 2006-2007, and continue to be some of the most influential pop-punk LPs of all time. (I used the Asian Man version for this review, so it also includes the songs from the Bubblegum Dreams EP.)

This was also the last Queers album with the classic lineup of Joe King (guitar/lead vocals), B-Face (bass) and Hugh Oâ€™Neill (drums/vocals). The band went through a ton of members before and after this lineup, with King as the sole constant. No version of the band was as beloved or as productive as this trio. Oâ€™Neill died of brain cancer in early 1999, eliminating any chance of a reunion. The band would revisit the Brian Wilson worship on 2007â€™s Munki Brain, but King and Lisa Marr were the only two to appear on both. Love Songs for the Retarded might be The Queersâ€™ most popular album, but Donâ€™t Back Down isnâ€™t far behind. It remains a definitive document of what Summer is supposed to sound like.Â