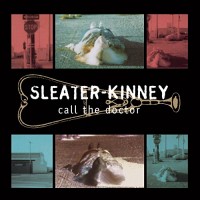 Â  Â  Â  Â  Â  Â  Â  Â Â While Sleater-Kinney already had one album under their belt at the time Call the Doctor was released, this was when the band became a full time endeavor for Carrie Brownstein and Corin Tucker. And that moment couldnâ€™t have come soon enough, while both of their former bands, Excuse 17 and Heavens to Betsy, respectively, were powerhouse bands in the riot grrl/queercore genre when they brought their powers together they created the greatest band to come out of the state of Washington and gain notoriety in the nineties. Yes, better than Nirvana. Yes, better than Pearl Jam. Yes, better than Bikini Kill.

Â Â Â Â Â Â Â Â Â Â Â Â Â Â Â  This was the album that allowed them to begin building that legacy. Written in less than three weeks and recorded in less than three days, this album was put in the express lane in terms of its composition. It also continued the tradition of the band consisting of two guitars and a drummer, which likely added to their unique sound. One of the things that set them apart from other bands playing punk rock at that point, was they were able to span the gap between unadulterated fury and pop sensibilities in a manner most other bands were not. This can be found in the manner the guitars on the album play into and out of one another, never searching to overpower the listener with speed but, rather beat them into submission with sheer force. Â Songs like â€œCall the Doctorâ€, â€œLittle Mouthâ€, and fan favorite â€œI Wanna Be Your Joey Ramoneâ€ are testament to this.

Â Â Â Â Â Â Â Â Â Â Â Â Â Â Â  While the voices are important, the lyrics those voices are singing are just as important. And in the case of Sleater-Kinney those lyrics tend to hold great meaning and be very powerful. The first lyrics on the album, â€œThey want to socialize you, they want to purify you, they want to dignify you, analyze you, and terrify you,â€ seem to be coming from the same place that Bikini Kill was on â€œStatement of Vindicationâ€ released the same year. Both bands were railing against trying to find yourself in standards that exist anywhere other than inside yourself. Elsewhere the band would sing about being with someone who is afraid to come out on â€œAnonymous,â€ Â sexism playing a huge factor in which musicians get idolized on â€œI Wanna Be Your Joey Ramone,â€ and they would also touch on the day-to-day events of relationships on a number of songs.

Â Â Â Â Â Â Â Â Â Â Â Â Â Â Â  The influence this album had is also significant, playing off of something that was once said about the Velvet Underground, the album may have only moved 6,000 copies a year after its release. But, it seems like every single person that bought a copy of the album started a band because of it. To think of the bands that currently exist that owe some debt to Sleater-Kinney is easy, off the top of my head Screaming Females and War on Women were and likely still are huge fans of this band. While this album may not be the first one Sleater-Kinney fans picked up, or even their favorite, much of the bandâ€™s current sound and style started with this release. And for all of these reasons, itâ€™s very much deserving of being called a classic.Â

The Queers: Don't Back Down