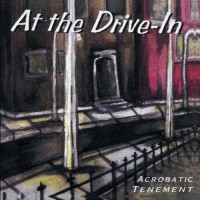 There's no shortage of controversy or drama that follows At The Drive-In. From their breakups and splinter bands (The Mars Volta, Sparta) to their multiple reunions which are always met with cynicism. Oddly enough, they've cancelled a slew of shows yet again but this time due to Cedric Zavala's throat issue. But when it comes to the inner-turmoil and chaos behind the scenes, no one wears it better than ATDI. As fucked up as things go with them, it's hard to dispute the legacy they've left behind in terms of post-hardcore, post-punk and dare I say, the reinvention of both. Acrobatic Tenement was their first full-length and built on the promise that EPs like Hell Paso and Vaya showed, which more or less hinted that they were beyond special. That they were the proverbial lightning in a bottle waiting to happen.

There's a lot of backstory to this record, especially how it was produced. A few employees of Flipside caught them in a dive bar in LA, loved their energy and decided to put the album out for a few hundred bucks. That's the kind of fairytale ATDI experienced. That's the kind of luck that fans, decades later, still can't find words to appreciate. From the clashing vocals of Zavala and Jim Ward on "Starlight", off the bat you're hit with frazzled riffs, bombarded with melodies that throughout the album that lack a fluency...yet somehow, all meshed together. At that point, it was hard to argue with why they were the new Fugazi. With the definite ATDI line-up still not formed, I always wondered how this record would have played out with Omar Rodriguez on guitars with Ward instead of bass. But most of all, it was the lyrical content that proved the most compelling and emotive factor of the record. "Ebroglio" was dedicated to friend, Julio Venegas who committed suicide and who'd later find bigger tribute by TMV and it was these kinds of songs you wanted to share sweat with and mosh/thrash/dance to in the presence of strangers in the basement. Because that's what ATDI were offering. A place to come together in solidarity.Â

Acrobatic TenementÂ also yielded one of the most haunting, cerebral songs to I've ever heard. "Initation" focused on the loss of two fangirls who died after a show and I've had quite an extensive series of conversations with Jim Ward who described how long it took for them to get over it and how much it influenced their music thereafter. Jim and Omar screaming to the slower, burning melodies of Cedric's voice was something that won over even the biggest doubter. These songs weren't their loudest, their angriest but it packed so much restlessness and angst that it's hard not to connect with. When it comes to ATDI, this album's one of their least musically intricate but as songs as "Porfirio Diaz" wraps things up, it's easy to look back and see the seeds being sewn for tracks like "Invalid Litter Department" and "One Armed Scissor" years later. There's a lot of power to their music and it more or less started full-scale on this record. They've never ducked personal or real-world issues head on and ATDI signaled their intent to revolutionize music in America with this album. Calling it a statement and of course, timeless, would be a gross understatement. Every song hits home hard. Every song feels and sounds different. Every song flows remarkably into each other. Couldn't have asked for a better start to the trip.