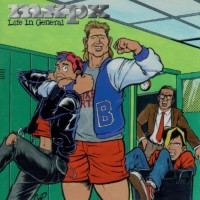 Life in general is complete shit, and so is the album.

When I first got into punk, this was one of the first albums I picked up and listened to regularly, and there was only one real reason for it: I wanted to be a good Catholic boy. I was a bit of a devout Catholic growing up (thankfully Iâ€™ve converted to agnosticism/not caring), and had trouble reconciling the morality of the Catholic Church and my love of rock music. In my confirmation class, the teacher told us that secular rock music could lead us astray from our faith, and that there were plenty of Christian rock bands out there that we could listen to instead. While I was hardly going to stop listening to all the bands I already loved, I decided that the best way to avoid eternal hellfire was to find some Christian bands that sounded like the music I like. And boy, are there a lot of them out there. Christian punk. Christian ska. Thereâ€™s even Christian death metal, and while Iâ€™ve never been a fan of death metal, I loved listening to Christian death metal simply because, even in my most faithful Catholic school boy days, the concept of Christian death metal was absolutely hilarious to me. (Then again, I can never understand what death metal singers are saying anyway, so for all I know, theyâ€™re all reciting bible verses.)

But when you looked into Christian punk bands in the 1990â€™s, MxPx was the band that always came up, specifically because they were the biggest band to have crossover appeal between both Christian and secular punk audiences. In fact, their appeal to the Christian audience had more to do with publicly declaring themselves Christians and signing to a Christian punk label, and then writing very little about Jesus, at least on Life in General. Really the only references to Christianity on Life in General are shoehorned into unrelated love songs like â€œAndreaâ€ and â€œDo Your Feet Hurt.â€ To be fair, this avoids one of the pitfalls of Christian Rock: any band who writes all their songs about the same subject, regardless of the subject, is going to get boring. Remember that punk band Rice that set out to prove they could write an entire album about rice? They succeeded, but for obvious reasons, never put out a second album.

I think this was the strategy behind MxPxâ€™s career: try to appeal to a wide audience, but occasionally claim to be Christian so you have a niche audience to fall back on if you fail with the general audience. Thatâ€™s why their supposed Christianity always seemed disingenuous to me. While some of their other albums have a few more â€œChristianâ€ songs (The Ever Passing Moment has a few tracks that could easily fit on the soundtrack for one of those Godâ€™s Not Dead movies), for the most part the Christian references are kept so rare and hidden that you wouldnâ€™t notice them if you werenâ€™t already aware that this is a supposedly Christian band. I believe thatâ€™s intentional.

Having the backup audience in the Christian market was probably a smart idea, as frontman Mike Herrera is a terrible songwriter. He comes from what I like to call the Tom DeLonge school of songwriting. Thatâ€™s where you write the first line, and then twist the next line into some sort of Frankensteinian contortion to make it rhyme with the first line, without ever considering the possibility of changing the first line instead. This results in some tortured lines like trying to pretend that â€œgirlsâ€ and â€œflowersâ€ somehow rhyme.

But Iâ€™m getting ahead of myself, here. The album gets off to a terrible start with Herrera nasally belting out the line â€œEmotion is my middle name,â€ which is somehow both overly melodramatic and nonsensical at the same time. This is then followed by some big chunky guitar riffs that just scream â€œGreen Day just became famous last year and weâ€™ve been listening to them a lot!â€ â€œMove to Bremertonâ€ shows supposed Christian, Mike Herrera, encouraging teenage girls to drop out of high school and come to live with him instead, which is fairly creepy when you consider that Herrera was 20 when this song came out. â€œDo Your Feet Hurt â€œshows that MxPx to be so linguistically inept that they donâ€™t even know how pick-up lines work, because the entire song revolves around shoving two pick-up lines together so awkwardly that neither one makes sense anymore.

And what can I say about the albumâ€™s most famous track, â€œChick Magnet,â€ a song that is instantly recognizable by its signature bassline that is blatantly stolen from Dead Milkmenâ€™s â€œBitchinâ€™ Camaroâ€? Besides, as I mentioned before, the cringeworthy attempt to rhyme â€œgirlsâ€ with â€œflowers,â€ the song has little point. It seems to take a sardonic, bitter attitude towards the songâ€™s title character, but fails to explain anything that the â€œChick Magnetâ€ does thatâ€™s actually cruel or immoral. He womanizes, but seems to be pretty respectful to all the women heâ€™s been with.

In 2012, when MxPx put out a new album, Plans Within Plans, and I gave it a try hoping that, since theyâ€™ve grown up a lot and claim to no longer be Christian, they might have matured into a much better band. Unfortunately, two songs in, I got fed up and threw the damn CD out, because in the nearly 20 years of their career theyâ€™ve failed to learn how to write a song, Christian or not. Without the niche of being a Christian-in-name-only band, MxPx shows their true face, as a below average pop-punk band with all the lyric writing talent of cat with a pen in its mouth. Life in General is one of the most overrated punk albums of the 1990â€™s, and doesnâ€™t hold up two decades later. Letâ€™s please all make an agreement to forget this album ever happened.

At The Drive-In: Acrobatic Tenement