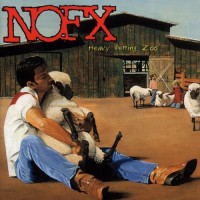 There was no question that NOFX is one of those iconic punk bands of the 90â€™s. Ribbed, White, Trash, Two Heebs And A Bean, Punk In Drublic are all considered 90â€™s classic albums that still hold up to this day. And though it is a solid album, 1996â€™s Heavy Petting Zoo comes short of the aforementioned releases. The songs on this one just don't compare NOFX anthems like â€œLinoleumâ€ or â€œStickinâ€™ In My Eye,â€ nor have they really held up twenty years later.

Heavy Petting Zoo was a very scattered and sonically inconsistent record. You just have to wonder how a hardcore tune â€œHobophobic (Scared Of Bums)â€ and heavily grunge-influenced songs such as â€œHot Dog In A Hallwayâ€ and â€œLove Storyâ€ made it on to the same release. There were a few consistently classic NOFX sounding songs on here like â€œRelease The Hostagesâ€ and â€œDrop The World.â€ â€œRelease The Hostagesâ€ for example, started out with a fast, treble-y bass intro, which quickly switches into that amazing melodic hardcore that NOFX helped pioneer and arguably perfect back then.

But what did all of these songs have in common in 2016? They arenâ€™t that memorable to fans and arguably to the band members themselves because these songs rarely, if ever make it on to their current set lists.

There was one song that could arguably have been the most memorable of the bunch though, and that would be â€œLiza.â€ This track had some of the best lyrical work NOFX had recorded at this point in their career. Their ability to mix their multi-part vocal harmonies with hardcore instrumentation was very cutting edge back then. But what also made this song one of the better on Heavy Petting Zoo were the lyrics, â€œSheâ€™s been around a couple years/Tasted thirty-one flavors/Thereâ€™s only one she really hates/That would be vanilla bean/The blend is one t make her scream.â€ That in itself was a classic NOFX line in a classic NOFX song.

Heavy Petting Zoo was a good look as to what the band was going for in mid-90â€™s. It was a bit of time capsule in that sense. Except for a track or two though, there really wasnâ€™t anything that noteworthy about the songs on this record. The most â€œclassicâ€ aspect about this album is the â€œvery recognizableâ€ album art and maybe a track or two. But in terms of it being a definitive 90â€™s punk album, there were a bunch of others that could be chosen before it in NOFXâ€™s discography. Heavy Petting Zoo was not NOFXâ€™s best, nor is it their worst. It was just sort an â€œin betweenâ€ record