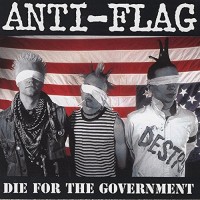 I loved Anti-Flag when I was young, I think everyone that was into punk rock loved, or at least appreciated Anti-Flag. Those who werenâ€™t very familiar with Anti-Flag may have even pretended like they were, metal kids liked it, punk kids liked it, I think youâ€™d even find some of the spikey haired emo-kids with an Anti-Flag patch stitched to something. Despite Anti-Flagâ€™s popularity leading a charge of 90â€™s anarcho-political teenage angst, they didnâ€™t age quite as well as some of their peers.

Now, donâ€™t get me wrong Die For The Government is far from a lousy record. It is a well-written, angst-driven punk rock album. The song â€œDie For The Governmentâ€ is a song many of us will remember for years to come, it would be welcomed on a nostalgic playlist and without doubt be perfect for a car ride sing along for aging punk rock fans. The main issue with this record is that it does not transfer over well from a teenage audience to adult musical taste. At some point whether we like it or not, fighting the government and rebelling from authority starts to lose some of its charm.

With that being said Die For The Government has quite a few awesome songs, â€œDrink, Drank, Punkâ€, â€œF*ck Police Brutalityâ€, and â€œYouâ€™d Do The Sameâ€ are all classic Anti-Flag songs. They are well-constructed songs with memorable (although not exactly intelligent) choruses, and it is obvious that the members of the band are very proficient at their instruments. It leaves me with the question if I had not enjoyed this record years ago, would these songs still be as good? Would new teenagers love these songs as much as we did years ago? I think there is a good chance that they would, and â€œF*ck Police Brutalityâ€ might be as relevant now as it ever has, but the bottom line is, I donâ€™t think youâ€™d see many people in their 30â€™s listening to an Anti-Flag record from front to back.

Part of me will always love Anti-Flag, they have many songs that I enjoy from more than just this first record, but at the end of the day even though I still enjoy quite a few Anti-Flag songs, it is the nostalgia that I love more so than the music. I canâ€™t say Iâ€™d pick up a current band writing music in this style, or even a new Anti-Flag record for that matter, and give it a serious listen. I get enough politics and social commentary from far too many other sources that the last thing I need is to hear it in the music Iâ€™m listening to when I am trying to relax (I know, how un-punk rock of me).Â

Die For The Government is a great 90â€™s punk rock record; it is full of all of the perfect teenage angst and fury that you would want. It is a nostalgic and fun listen, however I find it hard to believe that any one of my current age group would pick this record up and love it if they missed it in their younger years. Will Die For The Government last the test of time? It may hold a special place in many aged punk rockers hearts, but I donâ€™t think it has aged as gracefully as many of the other punk rock bands of their time. Die For The Government is a fun listen that I recommend for anyone wanting to have a taste of punk shows of the past, or to anyone who is a little younger trying to cut their teeth on some older punk rock, but for those who werenâ€™t there or missed it years ago, I think the Anti-Flagâ€™s charm may be lost on you.Â

Texas Is the Reason: Do You Know Who You Are?