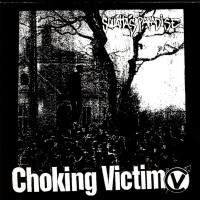 Of the three EPâ€™s Choking Victim released before their first and only full-length No Gods/No Managers came out in 1999, Squattaâ€™s Paradise was definitely the most of interesting especially looking at it 20 years later. First of all the bandâ€™s line up changed from having Sasha Dubrul on bass to having Alec Ballie, who still to this day is on stage with Leftover Crack. Unlike 1994â€™s Crack Rock Steady 7-inch some songs on Squattaâ€™s Paradise were rerecorded for No Gods/No Managers or for future Leftover Crack releases and only one was ultimately abandoned.


â€œInfested (Lindane Conspiracy Part 1)â€ the lighter song of the four on this 7-inch wouldnâ€™t make it onto No Gods/No Managers and fans wouldnâ€™t get to hear a proper rerecording of it until Leftover Crack reissued Fuck World Trade in 2015 (unless r you searched hard for it online). Though this song didnâ€™t make it on to Choking Victimâ€™s full-length it still managed to be widely considered a ska punk anthem that fans even twenty years later still scream for at Leftover Crack shows. â€œInfestedâ€ was one of their few songs that instead of preaching the bandâ€™s politics, the lyrics were somewhat lightheartedly about being overrun by lice and body bugs. The utter grossness of the lyrics mixed with the incredibly catchy main riff, ska chord progression and heavy verses are what made this track in particular one that fans of Choking Victim and later Leftover Crack would and still consider a classic. Hopefully, weâ€™ll get a â€œpart 2â€ in the future.

â€œDeath Songâ€ is the track on this EP that was all but forgotten. It didnâ€™t make it onto No Gods/No Managers, nor was it redone in any of the Sturgeonâ€™s other projects. Itâ€™s the thrashy-er of the bunch and the one none-ska tune. Of course this wouldnâ€™t be the only thrash-based song fans would get from the Choking Victim/Leftover Crack crew because also on the Fuck World Trade reissue is â€œBanned In P.C.â€ Lyrically, this song is pretty in line with the rest of Choking Victimâ€™s songs â€“ the obsession with death and suicide and the dangerous ramifications that industry could have on humans. And though the song is good, it is definitely not the CVâ€™s best. So leaving it for fans to find deep in the depths of their discography was fine.

Like â€œInfested,â€ â€œBorn To Dieâ€ is another song that you still hear Leftover Crack play live. Not many people realize that it was originally a Choking Victim song. It too did not make the cut to be on No Gods/No Managers, but it did get rerecorded for Leftover Crackâ€™s 2001 release Mediocre Generica, which in turn made it one of the earliest Choking Victim tunes to be fully adopted by Leftover Crack. Also like â€œInfested,â€ â€œBorn To Dieâ€ would become a ska punk favorite. Its message of how messed up reality can be and how life was meaningless was something people did not hear too often from the ska revival in the late 90â€™s, which is probably a factor as to why Choking Victim in general became so popular within the underground scene. But when it comes to the version on this EP, you can hear subtle differences between it and the one on Mediocre Generica. Sure the overall music is relatively the same, but aside from the production being of lesser quality than the other version, this one is a bit slower and Sturgeonâ€™s vocals were just beginning to mature. There are also â€œwoahs â€œ coming from the back up vocalists that would be taken out entirely on the later version, too. And if you listen closely the lyrics were slightly different and the instrumentation was not as tight.

The fourth and last track, â€œSuicide (A Better Way)â€ was the only track on this 7-inch to get on to No Gods/No Managers. Just like â€œBorn To Dieâ€ the lyrics for this early version of â€œSuicideâ€ some of the lyrics a different and the instrumentation is not as tight as the later one. Still this is a song that would become a favorite amongst Choking Victim fans. The incredibly dark lyrics mixed with the tinny ska verses and hard-hitting choruses were what made this band stand out so much.

A lot of what would be considered flaws on Squattaâ€™s Paradise were what made it so great. They are what made Choking Victim so amazing and unique. Yeah, the production was fairly primitive and sometimes the instrumentation was questionable, but that was what gave it its charm. This is a perfect example of how the DIY ethic can create some of the best music. The songs on this EP (along with the ones on the other two) are so important because they were the foundation of what would become No Gods/No Managers, an indisputable 90â€™s punk classic, and many of Leftover Crackâ€™s beloved anthems.Â

The Dwarves: The Dwarves are Young and Good Looking