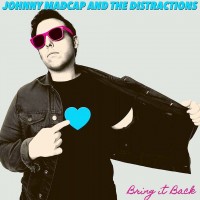 Johnny Madcap and the Distractions

Johnny Madcap and the Distractions have been kicking it up for about seven years by now, but Bring it Back is their first full length and, really, their first fully formed statement. The title is a reference to a certain spirit found in rock and rollâ€™s classic period- a period where earnestness, the joy of playing, and a true love of the form were the footholds for the music. Concepts that arose in the late 70s, and became even more pronounced in the 80s, such as cynicism, irony, and a de-construction of the form hadnâ€™t arisen yet. And true, the skepticism that the punks, indie rockers Goths, industrial warheads, and like viewed rock and roll was beneficial. That skepticism is what helped separate all the leeches and phonies in rock music from what it was really all about.

But, perhaps there is no more cash (and even fame) in rock music, perhaps those tools of cynicism and skepticism arenâ€™t quite as necessary in the â€˜10s, and have become as much a burden as a tool of defense. This is where Bring It Back seems to sep into the arena, though, seemingly, it makes the argument in favor of loving rock, as opposed to abusing it, through demonstration rather than oration.

The whole album is doubtlessly influenced by the classic Stiff period, with a focus on power-poppers like Nick Lowe and Elvis Costello. Those guys loved rock, and moreso, loved the melody of rock, and Johnny Madcap is on the exact same wavelength. â€œHere in My Handsâ€ ha a fundamental depth in melody and the rest of the song is built up from that. Itâ€™s the kind of snappy, clean song that the Beat would put right aside their hits. And, more importantly, the song is just a straight up love song. The band is brave enough, and wise enough, to cut a love tune that isnâ€™t jaded, or wry, or smarmy. Itâ€™s a heart on the sleeve rocker, which is rare these days. (Though, the song might actually be an ode to a dead lover?)

Likewise, â€œ10 Names,â€ much in the vein of the great â€œ88 lines about 44 women,â€ playfully runs through a list of failed romances. Like many of the songs, the perspective is painted from a distance that allows for a rose-colored look at relationships (focusing on the good parts without really diving into grimy realities) as well a universal take.

Of course, thereâ€™s always the fear of succumbing to retro-ism when one purposefully rejects the current state of affairs. Bring it Back could have run onto those rocky shores, especially considering the name. but, as mentioned before, because these songs are delivered with such conviction and honestly, they come off a genuine statements rather than a sort of costume. The compact ripper â€œActionâ€ makes a good argument for this. The song flies by quickly, with a few zapped out solos and little more than the sing-songy chorus, that thee really isnâ€™t any time to set up references to the past- the band is too busy doing what they do, which, of course, makes the whole thing feel immediate.

The fact is, thereâ€™s a lot of music out that that is built on loathing, hatred, and suspicion- and believe me, I lie that stuff. But, because Johnny Madcap and crew are too busy doing what they do to really succumb to any sort of jaded perspective, the release reaffirms what rock and roll is all about through sheer reverence for the form.

Note- The heart on the cover, placed just over Madcapâ€™s own organ, then transferred to the face of the CD, was an excellent little design metaphor. Kudos to whomever came up with that.