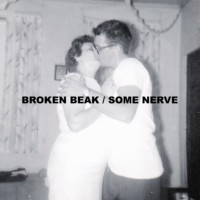 Another indie/emo act from Philly. Shocker, right? Before you go all hating and automatically assuming they'll be heaped with praise, let me tell you...well, Broken Beak's actually pretty good. It's a promising start for a band that plays off all-too-familiar emo tropes but who manages to still craft something that they can call their own. Modern Baseball's Brendan Luken is in on the act so you know kinda know what you're getting yourself into. Especially with vocalist Beau Brynes commenting on his littered past and the demons he's had to work through. Some Nerve is cliched but unflinching and honest.

Byrnes is quite expressive on a few tracks yet oddly restrained on others. "Saint" for example reflects on his misdeeds in what feels like tribute to Weatherbox. He's more open on the mic as opposed to say, "Matches" which more or less highlights that they're Mineral fans. Slow, burning guitars and a lot of lyrical depth. "Metal" stands out in this debut LP though with its unique guitar structure. Sludgy a la bands like Superheaven, Citizen and Balance and Composure -- aka the '90s emo revivalists -- which stylistically suits Broken Beak best. The main theme of the album centres around growing out of the mistakes you make in life and how it takes "some nerve" as they so eloquently put it. It isn't all doom and gloom though with some upbeat, mid-tempo jams to keep your foot tapping ("Deliver", "Cut Out") and remind you that Broken Beat are a versatile act. Some Nerve is the ideal piece of exposure they need and a great shot out the blocks.

Johnny Madcap and the Distractions: Bring It Back