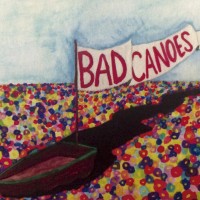 The question that first has to be addressed in this review is whether, I, a man, am even competent to review the Bad Canoes' Sheâ€™s Too Strong full-length. The second question that has to be addressed is, assuming the answer to the first question is â€œyes,â€ can I review said album without sounding like a total skeezo. Well, because the bandâ€™s message is one of power and triumph, but not necessarily one of exclusivity, Iâ€™ll give it a shot.

Quite amusingly, Sheâ€™s Too Strong functions as a sort of Holy trinity: Composed of the previously released Sisterhood is Powerful, the digital only Bad Canoes, and four new songs, itâ€™s the bandâ€™s first full length, their discography, and unfortunately, their epitaph. The band has stated plans to go on immediate hiatus, but assured a return in the futureâ€¦ well, Iâ€™m pretty sure thatâ€™s what those sourpusses in Fugazi saidâ€¦ fourteen years agoâ€¦

If anything, Sheâ€™s Too Strong is not only a perfect encapsulation of this band, but also, one of the most important releases of the decade. I will not retreat from this statement. One of the core attributes of the bandâ€™s catalogue is how they both celebrate womanhood, and moreso, place it on a divine pedestal, much akin to the ancient cultures. (Venus of Willendorf, anyone?)

The concept of divinity as expressed through uniquely feminine aspects prevails, here. Amusingly, the band sings both about having sex with Satan on â€œ6666,â€ and then again with his arch-rival, Moses on â€œJazz History.â€ Both times, the band neither suggests that these acts are good or bad things, but rather, things that must be done, and things that they want. That is to say, the woman is elevated from a â€œGoodâ€ or â€œEvilâ€ figure into a purely natural force. Gravity and water arenâ€™t good or bad, but they make the universe move and therefore, must be respected or even worshiped. We see that argument here, and as the band chomps on communion wafers in â€œnectar of the goodsâ€ with glee, and as they wage destruction on all opposition during the first trackâ€™s wonderfully dark evocation, thereâ€™s that same force.

And, not to draw out the dissection, but often in art, when the female is elevated or deified, it is within the context of her relation to other people- see the Madonna, Kali, or even Isis, who functions manly to snatch Horus out from murderous clutches of Seth. But here, Bad Canoes draft a peon on the power of sisterhood in relation to itself, an end unto itself. A driving force of this album is rampaging id. â€œDoggie Boneâ€ is about eating because you want to eat. â€œErotic appsâ€ is about harnessing technology to satisfy primal urges. â€œBug Juiceâ€ speaks directly about descending into an animal like state. There is no â€œwoman as the protectorâ€ here- only woman as a dangerous force...

Of course, this is elevated by how wonderfully weird, wonderfully unique, and wonderfully captivating the songs themselves are. The band uses no guitar, and instead, switches in a keyboard that sounds like it was snatched from a funeral home. Most songs are built from the foundation of Krispyâ€™s bass and Muscles' rumbling guitar. Itâ€™s a flightly, but heavy force, that adds a ghostly pounding to the band- I am reminded of the aesthetic, but not necessarily sound, of the spookier dubs of Lee â€œScratch â€œ Perry. Hear the fat, fat, fat, fat line of â€œFingerâ€™s Radiator.â€ The song rolls and rumbles like a colossal, oblong tire. Itâ€™s off kilter, but assured, something the band has mastered. Theyâ€™re weird. They know their weird. They like being weird. They use being weird as their fuel.

But, much in the great tradition of the Slits, Kleenex, and Raincoats, they use this fundamental rhythm anchor as a platform to be daring. Ivory plays the keyboards in a way that is almost seclusionist. There seems to be little formal training, resulting in a style that is riveting, random, and daring. Sheâ€™s not scared to bash nasty sounds against each other, such as the buzz-buzz on â€œMoon Day,â€ but sheâ€™s equally likely to sink down and enjoy the pure tonality of the instrument, as per the breakdown on â€œ6666.â€ Itâ€™s a risky style that pays off in dividends. Itâ€™s mean enough to give the band oomph, but it pulls back just enough to build ambiance.

And of course, Misty seems to be the wild-eyed, manic, high priestess conducting the procession. She zaps and zips from topic to topic, changing her style for no reason mid-song, flipping from screeching demon to sultry lounge singer within the span of 60 seconds. It makes the band seem dangerous, but also, bold- most bands wouldnâ€™t have the â€œballsâ€ to be so freaky and rapid-fire, but because they are so berserk, it comes to define them. And, also, of course, Mistyâ€™s other-worldly worldview drives this album as well. As discussed above, she approaches songs not from a sense of morality, but from a sort of ancient, primal drive. The band doesnâ€™t ask how people should behave, they repeatedly reinforce how they do behave, without passing judgment, except, perhaps, to congratulate the divine construction of sisterhood, in of itself, in relation to nothing else.

Goddess speed, Bad Canoes. There will never be another.