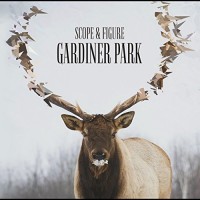 Scope & Figure have definitely grown as a band since their second EP, Exemplary Sports Magic. Not only is the songwriting stronger, but they exudes a lot more confidence in their exploration as a band. The album has a tendency to be in your face at times and other times right where it needs to be. Itâ€™s this experimental indie balance that embodies Scope & Figureâ€™s debut album, Gardiner Park.

From the start, the rhythm section on this album is awesome. Projecting great leads over chunky basslines and intricate drums. â€œMake Believerâ€ shows the band exploring a more upbeat sound with shimmering guitars and tight bass and drum combos. The song has a 80s vibe and shows off the bandâ€™s versatility when it comes to writing a full length. â€œWide Open Eyesâ€ brings out the dance side of the band with catchy guitars and melodic vocals that will make you wanna dance too. â€œTumbling Heartsâ€ might be my favorite song on the album; it embodies the sole sound Scope & Figure has to offer and turns it upside down.

Scope & Figure have a ton of genre influences under their belt that they do a great job blending into their infectious indie rock. Whether itâ€™s the psychedelic ending of â€œAntelopeâ€ or the garage indie rock feel of the bandâ€™s single, â€œSophia.â€ The band does a great job maintaining their sound and knowing when to incorporate their influences. The album is also mixed incredibly well with the sounds of the drums and the bass in sync with the guitars not quite overpowering the sound.

Overall, Scope & Figureâ€™s brand of experimental indie rock is truly something fresh and unique. Among the 12 songs, the album never hits a weak point and stays humble till the very end. Itâ€™s the solid unit that is Scope & Figure that allows the band to play off each other to release solid music. Gardiner Park is definitely a forward seeking progression from the bandâ€™s debut EP. With a tour already kicked off and a great new album, the band can only go up from here.