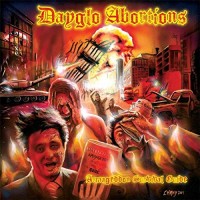 Iâ€™m not going to lie. Iâ€™m a huge Dayglo Abortions fan. I consider Feed Us a Fetus (1986) and Two Dogs Fucking (1991) to be classics, and they are a couple of my all time favorites. I actually didnâ€™t learn of the band until pretty deep into their career, as theyâ€™ve been around since 1979. It was maybe the year 2000 or so, and my shitty band was playing in some shitty bar. One of the guys from another shitty band playing that night told me that we reminded him of the Dayglo Abortions. I had heard of them, but had never actually heard them. The next time I was at my favorite mom and pop record store, I picked up Two Dogs Fucking. It was love from the first moment the sounds violated my ear drums. (I wish my shitty band had sounded like that.) I spent the next couple of years hunting down the rest of their LPs. With all due respect to DOA and SNFU, the Dayglo Abortions are probably my favorite band from Canada.

All of that being said, I really didnâ€™t expect Armageddon Survival Guide to be any good. It had been 12 years since the bandâ€™s last album. This batch of songs had been in the can for a couple of years, which is generally a bad sign. It would also be the first record without drummer, founder and sole constant member Jesus Bonehead. Iâ€™m very happy to report that my fears were completely unfounded. Guitarist, vocalist and primary songwriter Murray â€œThe Cretinâ€ Acton has risen to the occasion. Heâ€™s delivered a collection of new tracks that manage to sound fresh, even as they donâ€™t shy away from embracing the past.

Itâ€™s obvious from the start that this album has an audio quality far superior to their last LP, the sometimes muddy, sometimes distorted Holy Shiite!! (2004). Armageddon Survival Guide opens with the timely â€œYour Facebook Can Kiss My Assbookâ€. The song ends with the angry rant â€œYour facebook can kiss my assbook/Your facebook can kiss my fucking ass/And fuck the fuck offâ€. The title of the album mocks how many times the band has lived through the end of the world. This attitude is probably best represented by â€œCockroachesâ€. Itâ€™s a killer punk/speed metal song about societyâ€™s true overcomers. â€œVelcro Shoesâ€ is a half kidding, half serious song about being an aging punk. (I can sadly relate to this, as I've largely gone back to wearing slip-on Vans so I donâ€™t have to bend over to tie my shoes.)

â€œSick of the Liesâ€ is pretty self explanatory, and later on â€œNo More Bullshitâ€ has a similar message. They question why we lie to our children and speak to each other in unnecessarily pleasant euphemisms instead of being honest and direct. â€œI Love My Momâ€ is one of the best tracks on Armageddon Survival Guide. Itâ€™s a driving and pretty touching punk song about Cretinâ€™s feelings toward his aging mother. Itâ€™s also clearly references and responds to â€œI Killed Mommyâ€ from 1981â€™s Out of the Womb. â€œThe Dishwasherâ€ is a catchy, self deprecating song about fleeting nature of fame and a cautionary tale of economic woe.

â€œLeft Handed Nazisâ€ viciously attacks now deceased Apple mastermind Steve Jobs with â€œFuck you Apple/Fuck you Steve Jobs/You just wanted to be the internetâ€™s slumlordâ€. It either proves that even the dead are not safe from the Dayglo Abortionsâ€™ wrath, or that the song is a bit dated. Speaking of vicious attacks, â€œThe New Blackâ€ puts Barack Obama in the crosshairs. Their former prime minister Stephen Harper gets abused on the album closing â€œCanadian Hate-riotâ€. (They even go so low as to remind people that he once jammed with Nickelback.) The Dayglo Abortions are equal opportunity destroyers. They go after Americans and Canadians, and their targets include people on both sides of the political spectrum. My favorite track on the record is â€œTo Prove That We Are Freeâ€. Itâ€™s got a powerful riff and a powerful message.

Armageddon Survival Guide is 14 songs in 25 minutes, with no room for filler. Even the shortest tracks are razor sharp slices of punk aggression. Itâ€™s not at all politically correct, and that in itself is fairly refreshing in this day and age. It doesnâ€™t shoot for overt comedy, like some of the bandâ€™s previous work, but thereâ€™s still plenty of black humor. It doesnâ€™t take itself too seriously, but still manages to address serious issues. Itâ€™s angry and hostile, antisocial and antagonistic. In other words, itâ€™s everything a great punk record should be. This is another record that we really needed in 2016. Itâ€™s a big fuck you to the system. If youâ€™re new to the Dayglo Abortions, I would recommend that you start with Two Dogs Fucking. If youâ€™re lucky enough to already be on to these guys, this is going to be essential listening.