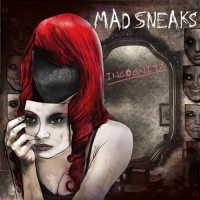 Brazilian alternative three-piece Mad Sneaks released their album IncÃ³gnita in 2013 with the help of Seattle-based producer Jack Endino. Mr. Endino is more famously known for working with famous 90â€™s acts such as Nirvana, Mudhoney, and Soundgarden. It is clear that Mad Sneaksâ€™s sound is influenced by these grunge-era bands so the fact that they got to work with Endino should seem like a perfect fit. However this match may have backfired. The band seemed to aim too much to sound like their influences (which they say are Nirvana, Pearl Jam, Soundgarden, etc.) rather than creating their own distinguished sound. The album awkwardly switches between slow and heavy grunge-ish tunes to heavy metal that borders Cro-Mags territory at some points -- and the whole thing comes off as disjointed.

IncÃ³gnita starts off with a purely instrumental track titled â€œCanÃ§Ã£o Sem Fimâ€ that mainly consists of a guitar riff that easily could have been taken from an early Metallica song. The track after this is really where you can hear their slow 90â€™s rock influence. â€œA Curaâ€ consists of a very heavy, but relatively simple chord progression coming from the bass and guitar, but where it immediately comes off as derivative is when the vocals come in. The singing seems like something straight out of the Kurt Cobain starter kit. They are very monotone (on purpose) mixed with a heavy drone.

The track â€œBiocidaâ€ is on the other side of the of the 90â€™s spectrum. It is a much sower and calmer â€“ like on of those clichÃ© acoustic ballads. This song is filled with these â€œcrawlingâ€ acoustic guitar riffs that fill in spaces between the vocals. The drumming is noticeably simple and pretty boring. This song seems way too focused on the lead singer really to the point where it comes off a pretty self-gratifying. Now keep in mind that this all goes on for about two and half minutes and then suddenly everything stops briefly until a crunchy guitar riff disjointedly comes out of nowhere and speeds things up significantly as if it is an entirely new song making â€œBiocidoâ€ well over four minutes and by far the longest song on the album. The lead singerâ€™s voice gets dramatically higher for a short time, which is then followed by a wailing guitar solo. After finishing this track and album for that matter, you just come out of it feeling totally confused.Â