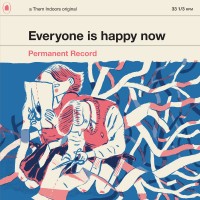 It might have a new name on the sleeve, and it might be six (I think?) years since the man's last record, but Permanent Record is UK musician Dave House's fourth solo albumâ€”although he has busied himself as part of the bands Pacer and The Steal for at least some of that time.

It seems to me that "punk guy goes acoustic solo" is less of a trend now than in 2009. Back then, there was a glut of the stuff, most of it forgettable and affected. Those who persevered with it seem to now be either folk-punk institutions (Frank Turner, Chuck Ragan) or thankfully absent.

Dave House may not have the draw of a Ragan, Turner, or even the similarly-named Dave Hauseâ€”presumably a partial reason for the new Permanent Record monikerâ€”but he manages to at least sidestep the overblown gravelly-voice shtick by continuing to develop a more indie-pop influenced sound. The result is low-key, but in a natural rather than self-absorbed way. My favourite of House's albums before this one, 2008's See That No-One Else Escapes, felt like a regular southern English guy letting his thoughts and observations of modern life tumble out without resorting to cheap choruses or whining. 'Everyone Is Happy Now' does something similar, but with more ambitious background instrumental work which occasionally reminds me (on opener "Ten To Two" and a couple of others) of a stripped-back Jets To Brazil. Actually, the album's strength lies in its flitting between this newer sound and songs like 'I Can't Believe You're A Fireman', which sound a lot more like House's earlier work. We even get two instrumental tracks: the second one, "Airport 5am," is a vaguely ambient recreation of what that time and place feels like, and both tracks provide the texture and variation lacking in the earlier albums.

Lyrically, the everyday subject matter reminds me very slightly of pre-megastar Frank Turner, but deals with getting older and less involved with a scene or community (most obviously on 'The Vision') and how this mirrors the modern world's disconnection and obsession with technology. Appropriately, the album contains references to Aldous Huxley's dystopian classic Brave New World, and that novel's vision of the future is never too distant from House's thoughts throughout. This doesn't mean the album is miserable or depressing; just reflective, occasionally triumphant, and above all honest without resorting to clichÃ©s (always a risk with this style of music).

This isn't the sort of album to be considered "seminal art" or "genre changing," but why would anyone want to listen to that sort of thing every day? House's hard work and DIY approach to the albumâ€”on which he played everythingâ€”have resulted in a highly personal musical vision, easy to listen to but with depth and meaning not far beneath the surface. It's good to have him back to making solo records alongside his other projects.