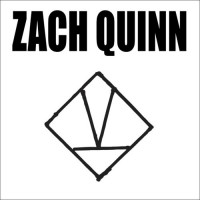 Any fan of PEARS had to have raised an arching, skeptical eyebrow upon hearing of front man Zach Quinnâ€™s plan to release an acoustic album via Joey Capeâ€™s One Week Records. Having trail blazed a two-year path to becoming the Paul Bunyan of punk front men, a larger-than-life presence in the current scene revival, itâ€™s hard to remove Quinn from his particular craft of orchestrated cacophony which plays such an integral part in PEARSâ€™ striking deviation from the norm. The road of front-man-turned-acoustic-solo act is paved equally with stories of both success and failureâ€”at best, these acoustic ventures occasionally manage to eclipse the renown of the original associated act; at worst, they can alienate an established fan base by delivering a lackluster, watered-down rendition of the familiar by forcing an accustomed, beloved sound into an acoustic format. With this in mind, trying to imagine Quinn accompanied by anything other than a sound that matches his furious grandeur was confusing, if not almost altogether uncomfortable. Lesson one: Zach Quinn did not set out to reinvent the PEARS wheel with his acoustic debut, but rather break the mold. No less passionate or poetic, the 10 songs featured on One Week are not a mere re-imagining of B-side PEARS material or an attempt to perform PEARS-goes-acoustic; while the offerings are unquestionably elevated by the same emotional intensity seen in Quinnâ€™s collaborative act, One Week is fueled by an entirely different impetus and medium, delivered by Zach and Zach alone. The result is refreshingly uncharted territory.

In regards to sound, the tracks run the gamut of acoustic potential, underscored with the dutifully minimalist signature of One Week Records and Joey Capeâ€™s expert guidance â€“ the result is not perceived as edited, as in â€˜something removed fromâ€™, but rather tailored to Quinnâ€™s musicianship which unarguably extends far beyond that which we have seen before. Starting off somber with a dash of Stockholm Syndrome, â€œAnchorsâ€ sways with the haunting rhythm of the metaphorical ship it is describing, utilizing cadence as well as lyric to evoke the intended imagery and emotionâ€”Edgar Alan Poeâ€™s â€œBellsâ€ put to an Elliot Smith-esque instrumental, if you will. Already the dichotomy is crystal clearâ€”whereas PEARS excels at, and are praised for, their ability to facilitate the translation an easily-misheard lyrical message through the simultaneous effect of lyric, music, and performance, acoustic Quinn perches delicately between music and lyrics to cultivate the overall feel. The effect is equal parts participatory and voyeuristic, as seen with the folk-y, finger-picking â€œJinxâ€.

Seemingly another venture into the melancholic narrative of love unrequited, â€œJinxâ€ waxes poetic and heartfelt until the lyric â€œI miss the litter in my bedâ€ registers, and after a few more listens, just doesnâ€™t quite jiveâ€”it is in this stark moment that you realize that your heart is not currently being trampled by another woeful tale of boy-loses-girl because the â€œsweetheart symbiontâ€, Jinx, is Quinnâ€™s cat. On that M. Night Shyamalanic note, I quickly quantified â€œJinxâ€ as the second of only two cryptically feline songs with the potential to bring an involuntary tear to the eye of anyone with a pulse (the first, of course, being Propagandhiâ€™s â€œWithout Loveâ€â€”R.I.P. Cronie).

Further still, Quinn pushes the envelope along with â€œCupcakeâ€: sauntering, sardonic, and perfectly punctuated by Capeâ€™s repeated cry of â€œIâ€™m a cupcake!â€. The faintest of whip cracks heard in the background highlights the peripherally uncomfortable, almost sarcastic sexuality that is implied throughout, imbuing â€œCupcakeâ€ with a purposed theatrical artifice, an acoustic burlesque painted with a shit-eating grin from ear to ear. But we know â€œwhat goes up must come downâ€, and with any striptease, physical or otherwise, comes the inevitable nakednessâ€” â€œCupcakeâ€ abruptly shifts gears into bared vulnerability with a change in melody and the mention of rain, a reoccurring theme throughout One Week. Carrying the song through to the end, Quinnâ€™s raw chanting of â€œIâ€™ve got to keep it togetherâ€ echoes with equal parts mantra, war cry and plea. But itâ€™s not all gloom and angst; â€œPoohâ€ is a jaunty, pivotal countermeasure to any creeping maudlin self-pity, addressing the issue head on in the childishly taunting, almost â€œmetaâ€ intro: â€œthis is a tiny violin, and itâ€™s playing just for youâ€. Upbeat while playfully self-deprecating, the shift in overall sound is redoubled through the lyricsâ€”the mention of â€œrain bootsâ€ stands in notable contrast to the otherwise regular allusions to rain; not necessarily a permanent solution, but an improvement nonetheless.