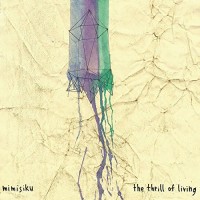 Mimisiku pull off a familiar emo without copying and pasting whatâ€™s been done before. The Denton, Texas group call back to the hooks of The Promise Ring, the high-pitched vocals and keyboards of The Get Up Kids, but at times they travel into the similar darkness that early Cursive came from. The debut LP blends previous stylings of emo into their own rough and cathartic hook-laden sound. Bassist and Vocalist, Parker Lawson takes the lead on each song with his commanding bass performance and itâ€™s an absolute treat to hear bass played like a lead guitar. His vocals might be a little hard to take for some; the high pitch turns into a shriek at times, but to my ears it was an honest and organic vocal style that I easily welcomed.

The Thrill Of Living achieves a lot through the course of a ten track LP. Mimisiku manage to get playful and self loathing, technical and rough, and lush and disheveled throughout the course of the record and even within the same track at times.The recordâ€™s first single, â€œThe Hand Strikes and Gives a Flowerâ€ is easily the highest point of the album. The downtrodden cut sneers with a dry attitude that brings you to a halt with lines like â€œThey said â€˜youâ€™re queerâ€™ and I said â€˜you finally got something right.â€™â€ â€œKettlers of Satanâ€ is an enigmatic track that crashes midwestern emo and whimsical keyboard lines into each other within the same measure. â€œIt Depends On Whether Your Conception of Time is Linear or Circularâ€ moves from a dreamy and drifty first half that erupts into a muddy and fuzzy fury at the end.

Mimisikuâ€™s debut is a prolific one that makes me hope the record resonates with the rest of the followers in the genre. The bands showcases personality and musicality that makes them stand taller than the â€œtwinkle-daddiesâ€ and American Football 2.0s that the internet adopts as the supreme emo of 2016. Though itâ€™s short and arguably a tad underproduced, The Thrill Of Living provides just what a debut should; a shot of charisma, exciting songwriting, the feeling of wanting more, and the Jungle 2 Jungle reference you never knew you needed. Â