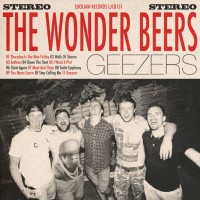 If Andrew W.K. was born in London and, instead of becoming a rock-n-roll ambassador for partying, he got a 9-5 job where his only desire was to go to the pub afterward and get pissed with his mates, then he would probably write the types of songs that The Wonder Beers have given us on their first full-length, Geezers.

I can tell you without a doubt that The Wonder Beers truly do have a singular theme. Each of the eleven songs on this album revolve around the pleasures and/or pitfalls of a night out drinking. The lead track, â€œThursday is The New Friday,â€ doesnâ€™t hesitate in pulling you into TWBâ€™s world. Working stiffs who still like a good time out can all relate to what this song is saying, and who wouldnâ€™t rather start the weekend on Thursday? Albeit knowing what hell youâ€™ll end up going through at work the next morning.

â€œWalk of Shameâ€ is an anthem to exactly what it says, which is a common theme and a bit overdone in music but TWB, always clever in their lyrics, make the song worthwhile. â€œDown the Shotâ€ and â€œMeat and Chipsâ€ express activities and desires that I think many of us have had at one point or another. Drink more, get hammered! And the unrelenting and sudden need to eat after bar time.

â€œI Want a Pintâ€ is likely the most punk sounding song of the album. Angry and bitter and, just like a patron entering the pub after a long day, this song doesnâ€™t take long for it to reach its unrelenting chorus.

The most poignant track, â€œYou Never Learn,â€ takes the sobering fact that the more you drink, the less control you have, and packages it into a great sing-along song that just about anyone can get into. You may laugh along with it, but the lyrics will also really hit home for a lot of people.

The Wonder Beersâ€™ style is fairly straight-forward. A thumping beat with quick guitars and solid bass, the music isnâ€™t incredibly exceptional. Minus the humorous themes and lyrics, they sound a lot like the type of pop-punk/rock a million bands have done before. For those who arenâ€™t fans of this particular style, the songs may come across as repetitive in sound after a while. This isnâ€™t to say it is bad, though. It is well-played and the production values of the album are top notch.

With that in mind, where this album shines is definitely the content of the lyrics and vocals. The writing is clever and funny, and the vocals are unabashedly British, with the accent coming across as almost deliberately exaggerated. Backing vocals are done well and fit into the compositions nicely. Sing-along anthem choruses are abound, and they truly are the type that will get stuck in your head. I tend to find myself, perhaps a bit inappropriately, singing them to my 4-year-old daughter.

Overall, it is a fun album that is a blast to listen to. But its longevity will come down to whether or not you buy in to what The Wonder Beers are selling, and it is always like this with bands who latch onto a theme- playing the part and centering their songs around it (think Masked Intruder). If you donâ€™t buy in, then this album will likely just be a pleasant one-off. But if you do, this will be an on repeat for days if not weeks.Â

Mimisiku: The Thrill of Living