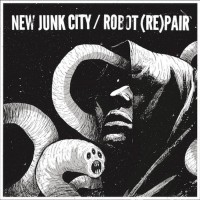 Â  Â  Â  Â  Â  Â  Â  Â Â The split between New Junk City and robot (re)pair bring together two bands hailing from different parts of the country, Atlanta and Tempe respectively. While they may not share much in the way of geography, they share an ability to produce great, albeit very different, punk songs.

On the first of two tracks New Junk City has on the split â€œEverything Goodâ€ lead vocalist Johnâ€™s whiskey soaked voice laments the realities of depression as he sings, â€œAll my limbs get stuck together in the weird physic tether that keeps me from feeling good. And on the days I feel the worst about my broken brain, pornography and coffee keep me sane.â€ While our coping mechanisms may not be the same, there are few among us who havenâ€™t been at this point at one time or another. No, itâ€™s not the most sophisticated lyric ever; but thereâ€™s so much to be said for someone knowing that a lyric is relateable and knowing not to dress it up too much. Â Their next track follows in much the same vein, great heartland punk with a penchant for simple, related, and honest lyrics.

Robot (re)pairâ€™s sound is very different, whereas New Junk City had a big sound, the production of these songs is more lo-fi and works wonderfully for the band. The band sounds a lot like mid-era Bouncing Souls musically, which presents an awesome upbeat contrast to their lyrics. The exception to this, is the first track â€œPixie Fairy Dust (smash huemon patriarchal ownership relationships)â€ deviates slightly by Â almost sounding like some The Feelies would have recorded at some point. This, surprisingly, works just as well or even a little bit better for the band given the production value.

A big part of this bandâ€™s appeal, is their lyrics. While many lyricists write in more traditional song structures, working out verses and lyrics. This doesnâ€™t happen here, as the lyrics come off as journal entries that happened to become songs. This approach almost harkens back to the first two Jawbreaker albums, as you feel like lines such as, â€œI know I can change. But not today,â€ werenâ€™t meant for the public to hear but as a private confession. Matt Dobbins vocal delivery helps make a lot of this work, as he is able to easily transition from the delivery on â€œPixie Fairy Angel Dust (Smash huemon patriarchal ownership relationships) that brings to mind â€œThe Boy With Perpetual Nervousnessâ€ by The Feelies to the other tracks where he could be singing lead vocals on the Bouncing Souls' Maniacal Laughter.

These two bands couldnâ€™t be further apart musically speaking, but the two sides work together really well. Which can prove to be the difficult Â part of a split, getting two bands together who donâ€™t sound too identical but also not making the bands so different there wouldnâ€™t be any overlap in their fan bases. This is a solid split, from two bands thatâ€™ve been making noise for several years now. And itâ€™s very likely to get each band a number of new fans as well.Â