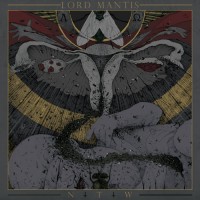 Lord Mantis is an extreme metal band from Chicago. While I enjoy the heavy stuff pretty regularly, I am by no means an expert on the subject. If I attempt to describe their music in terms of one or more of the many metal subgenres, I will almost certainly be taken to task by some headbanging know-it-all. Iâ€™m going to try to keep it simple. To me, this sounds like the heavier side of Ministry (also Chicago natives) with black metal vocals. NTW is the first recording with the bandâ€™s new lineup, including a new singer.

Opener â€œSIG Saferâ€ (SIG Sauer is a handgun manufacturer) is inhumanly fast with blast beats and samples. The vocals are mostly buried and all I can make out isâ€œSafer, safer, safer, saferâ€. I would be interested to hear (understand) their take on gun violence, considering that Chicago is one of the most dangerous cities in the US and also has some of the strictest gun laws.The title track slows things down a bit and adds some spacey sounds. â€œSemblancesâ€ has a little riff that almost approaches melodic. â€œBackward, forward, backward, forwardâ€. The seven minute â€œFinal Divisionâ€ closes the four song EP. â€œHonor the father, honor the motherâ€. Like the title track, it has dark sexual overtones.

NTW is 23 minutes of ugly, abrasive metal with almost no redeeming social value. Itâ€™s not terrible, but itâ€™s certainly not for everyone. When I looked this up on Amazon, it listed the title in its non-abbreviated form of â€œNice Teeth Whoreâ€. Itâ€™s a strange juxtaposition going between the punk and metal worlds. While punk has probably gotten too sensitive for its own good, metal is still dominated by cavemen. Listen at your own risk.