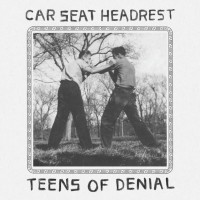 Thereâ€™s nothing better than discovering an incredible album by an exciting new artist, usually after sifting through plenty of garbage and recycled materials. Car Seat Headrestâ€™s Teens of Denial is that diamond in the rough.

Car Seat Headrest is, for all intents and purposes, Will Toledo. Over the past six years, Toledo has released a number of bandcamp albums culminating in last yearâ€™s Teens of Style on Matador. While having plenty to enjoy, Style was simply some of Toledoâ€™s best material reworked and repackaged. The talent was there but the lo-fi bedroom recordings left much to be desired.

Teens of Denial destroys his earlier work. His style has matured greatly along with his songwriting and production. The songs are rock numbers built on the backs of early alt rock and emo. Itâ€™s a meaty album, one that abruptly changes structure within a song. The numerous intros, interludes and bridges wander, offering perfect seasoning to the complexity. It can absolutely be overindulgent, but by that point, Car Seat Headrest is in control and youâ€™re strapped in.

As opposed to his earlier records, Denial is a full band effort. The other members follow their leader while acting as his soundboard. The drums are rolling and rhythmic as the guitars turn up on a dime. They are brash and loud. Horns are used sparingly yet righteously (and thereâ€™s nothing better than some good horns.) Every piece sets itself up for success and abrupt changes are there to keep you engaged, especially on the excellent â€œVincent.â€

But brilliant lyricism defines Teens of Denial. Toldeo is a goddamn poet, able to find the balance between introspectively personal and universally understood. It is a dark record and his sometimes mumbling/sometimes raging voice only adds to the sincerity. His twists of tongue and weird variables take on classic themes and mold them to fit his own unique vision (â€œDrunk Drivers/Killer Whalesâ€). Toledo is bluntly honest whether discussing his bad acid trip on the insanely titled â€œ(Joe Gets Kicked Out of School for Using) Drugs With Friends (But Says This Isn't a Problem)â€ or when he yells â€œI didnâ€™t want you to hear that shake in my voice / My pain is my own!â€ on â€œ1937 State Street.â€ His purging is confrontational, sung with such passion itâ€™s hard not to get choked up. Quite possibly the most heartbreaking, assertive moment comes in â€œDestroyed by Hippie Powers.â€ â€œWhat happened to that chubby little kid who smiled too much and loved the Beach Boys? / What happened is that I killed that fucker and I took his name and I got new glasses,â€ connects with anyone whoâ€™s ever felt in need of a life reboot. These are just brief examples of the rich story telling. (For more see â€œCosmic Heroâ€ or the eleven-minute opus â€œThe Ballad of the Costa Concordia.â€)

Will Toledo has such a realized voice, an incredible feat for a twenty-three-year-old artist. Teens of Denial is a contender for album of the year, to say the least. Itâ€™s the rawest indie rock record since The Monitor. There are thousands of positive words to write about itÂ but nothing will compare to hearing it for yourself.Â

The Interrupters: Say It Out Loud