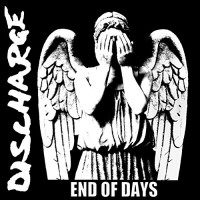 I had low expectations for End of Days, and ended up being pleasantly surprised. Iâ€™ve always loved Dischargeâ€™s early material, but their albums have been pretty hit or miss for the last three decades or so. That being said, itâ€™s impossible to deny the British bandâ€™s influence. Their pacifist politics inspired a whole generation of anarcho punk bands. (The UK82 sound.) Their driving rhythms and brutal approach inspired countless metal and thrash bands. Unfortunately, at some points along the way, the groundbreaking crust punk band was reduced to playing pedestrian heavy metal. Fortunately, End of Days is a rock solid slab of thrash punk. Itâ€™s much closer to the bandâ€™s classic output (Why?, Hear Nothing See Nothing Say Nothing) than their clunky 90â€™s metal stuff. Itâ€™s essentially 15 ripping, two minute tracks.

The songs are short, fast and angry with minimal, repetitive lyrics. Itâ€™s a formula thatâ€™s always worked well for Discharge. It can be grim and humorless, but doesnâ€™t come across as too preachy. The raging diatribes and protest songs cover all the topics you would expect. Thereâ€™s songs against the state (â€œNew World Orderâ€, â€œHung Drawn and Quarteredâ€). Thereâ€™s songs against war (â€œRaped and Pillagedâ€, â€œLooking at Pictures of Genocideâ€). Thereâ€™s songs against religion (â€œMeet Your Makerâ€, â€œIt Canâ€™t Happen Hereâ€). Thereâ€™s songs about police brutality and drug abuse (â€œThe Broken Lawâ€, â€œInfectedâ€). Album closer, â€œAccessories By Molotov 2â€, is a sequel to a song from their 2002 self titled LP. Overall, the songwriting is razor sharp.

The current version of Discharge seems to have great chemistry. New singer Jeff â€˜JJâ€™ Janiak spits out the lyrics with no regard whatsoever for melody. If anything, his voice is even a bit harsher than that of longtime frontman Kelvin â€˜Calâ€™ Morris. Guitarists and brothers Anthony â€˜Bonesâ€™ Roberts and Terence â€˜Tezzâ€™ Roberts crank out one metallic hardcore riff after another. Both were part of the classic lineup, although Tezz was the drummer (and is largely credited with creating the D-beat sound). Classic era bassist Royston â€˜Rainyâ€™ Wainwright is still holding down the bottom end. Even relative newcomer and drummer David â€˜Properâ€™ Caution has been in Discharge for a decade. (Yes, they all have nicknames AND wear their own bandâ€™s T-shirts.) I kind of figured these guys were a one (or two) man band at this point, and was impressed by how authentic this version of Discharge is.

Itâ€™s probably worth noting that Discharge and Broken Bones (originally formed by Bones and Tezz after the first Discharge break up way back in 1982) are essentially the same band at this point. Thereâ€™s always been a fair amount of sharing, but currently Broken Bones is just Discharge minus Rainy. The bands sound similar, but Discharge has always been an overtly political band, while Broken Bonesâ€™ anger was of a more personal nature. When it came time to make a new LP, they went with the greater name recognition of Discharge. (Or maybe the material dictated it.) The band does seem to be experiencing a career resurgence. Their postponed, but now rescheduled US tour has been drawing a ton of interest. Every band wants to play with them and every fan wants to see them. People really want this once very important band to be relevant. End of Days goes a long way toward proving that they still are. Itâ€™s an album worthy of the bandâ€™s significant legacy.