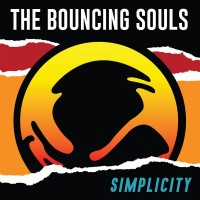 I felt a bit of relief when I put on the new Bouncing Souls album and the first song was upbeat and driving. I relaxed even more when the second song was fast too. Simplicity finally reverses The Bouncing Soulsâ€™ decade long slide into mellowness. The mellowing trend began with the wonderful The Gold Record (2006), and only grew more pronounced with Ghosts on the Boardwalk (2010) and Comet (2012). Not that those albums were bad. It turns out that The Bouncing Souls are quite good at playing power pop, but many of us still hoped for a return to their more aggressive punk style. This is the record weâ€™ve been waiting for. Maybe having a new drummer helped. (The Bouncing Soulsâ€™ first album with then new drummer Michael McDermott, 2001â€™s How I Spent My Summer Vacation, remains a consensus fan favorite.) Or maybe the guys made a conscious effort to go for a retro vibe with Simplicity, like the title sort of implies. Either way, long time fans are going to be happy.

As I mentioned previously, the album opens with the fairly fast â€œDriving All Nightâ€. Next up is â€œEuphoriaâ€, which is also fast and has an even better melody and hook. These two songs get things off to a nice start. Third track, â€œSatelliteâ€, slows things down considerably. Along with â€œGravityâ€ later on, it feels like a leftover from Comet. They continue The Bouncing Soulsâ€™ strange obsession with using outer space as a metaphor for life and love. These two songs feel like outliers in this collection. â€œDigital Twilight Zoneâ€ is another faster tune that laments the modern age. â€œI Wanna Be Boredâ€ is short and fast and deals with the mostly adult problem of being too busy. â€œHey Aliensâ€ reminds me of some of the shorter, more frivolous songs that the band has shied away from in recent years. â€œHero Zeroâ€ is another mellow song, but itâ€™s also a throwback to the days when half The Bouncing Soulsâ€™ songs were about failed relationships.

Thereâ€™s definitely occasions on Simplicity where it feels like The Bouncing Souls are recycling some of their old riffs. (Not that thereâ€™s anything wrong with that.) On â€œWriting on the Wallâ€ they might even borrow a hook from New Jerseyâ€™s most famous (living at least) musical son. (itâ€™s OK, every band from NJ does it eventually. It might even be subliminal.) This along with the next track, â€œRebel Songâ€, make for the albumâ€™s strongest one-two punch. â€œTightropeâ€ is an exceptionally catchy relationship song. â€œBeesâ€ is one of the LPâ€™s most serious songs, and questions whether or not any of us are doing anything significant with our lives. â€œUp to Usâ€ closes the record with another powerful track. It stresses the need for all of us to continue the legacy of the important folks who came before us. The 13 tracks are a nice mixture of short and light hearted, and longer and more intense. I would only call three of the songs slow or mid-tempo, the other ten speed right along.

Not surprisingly, Simplicity is a great sounding record. The production is flawless as usual. Pete Steinkopfâ€™s guitar, Bryan Kienlenâ€™s bass and newcomer George Rebeloâ€™s drums are all loud and clear. The harmonies and backing vocals are spot on. Of course, Greg Attonito is front and center and this feels like a showcase for his expressive voice. I think the only real question here is whether fans will feel an emotional connection to these songs. When most of us got into this band, they were all about angst and heartbreak. Theyâ€™re quite a bit older now, and their domestic situations are considerably more tranquil. (Attonito has even made a childrenâ€™s album.) Theyâ€™re probably not social outcasts or broke anymore. (I suspect they could all afford that BMX they once pined for.) Luckily, their fans have gotten older too. Most of us can relate to the more adult subject matter. While nothing moves me the way â€œI put that needle on the record/And I play that song againâ€ once did, I enjoyed Simplicity immensely. More than 25 years into their career, The Bouncing Souls can still deliver.Â