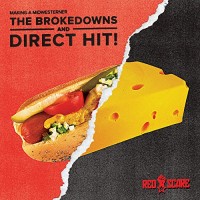 Well here it is. Here is probably the most underrated and overlooked release on 2016â€™s Record Store Day list. Making A Midwesterner is a 5-track EP with new songs from two great punk bands from (you guessed it!) the Midwestern United States â€“ two (plus one cover) from Eglin, Illinoisâ€™s The Brokedowns and two from Milwaukee, Wisconsinâ€™s Direct Hit!

The Brokedowns contributed three very cacophonous pop punk tunes for the A-side of this split. One of which is a cover of the Toys That Kill song â€œRunninâ€™ The Front.â€ All three though sound like they could have easily fit on Life Is A Breeze. They sort of fall into the same realm as songs such as â€œCash For Goldâ€ and â€œLife Is A Breeze.â€ During the track â€œCrowns And Grownsâ€ the bandâ€™s deep and hard-hitting power chords mix very well with their anthemic gang vocals. But to contrast all of that they throw in a very light, little riff that evens out the whole song. The Brokedowns pull you in all different directions on their side of this 7-inch and it is pretty fun to experience that.

The songs that Direct Hit! contributed are actually B-sides that did not make it on to their 2016 Fat Wreck Chords debut Wasted Mind. So if you couldn't get enough of their material from that album, this 7-inch is clearly the next release to check out. â€œChemical Abilityâ€ and â€œAvert Your Eyesâ€ because they sound sort of like they could fit in with the songs from Domesplitter, but they still keep true to the drug theme that Wasted Mind has rather than the monsters and Satan theme that Domesplitter has. The jangly, distorted guitars that blare over Nick Woodsâ€™s screams is a familiar and very welcomed sound they we have known and loved Direct Hit! for making. It is what makes them an incredibly unique pop punk band. For those of you that enjoyed Wasted Mind or anything else Direct Hit! has released, then you will be nowhere near disappointed with these songs. FYGP!

Nails: You Will Never Be One of Us