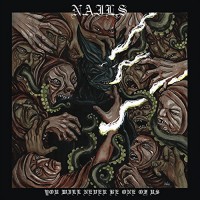 Oxnard, California noise monsters, Nails, have been the darlings of powerviolence the past few years, and with good reason. Unsilent Death and Abandon All Life were two of the loudest, bone shattering albums by any band in modern hardcore; music that offered a constant barrage of dominant, attacking guitars making listeners unable to think straight, while deep, primal vocals screamed through, a perfect short, fast, loud combination.

You Will Never Be One of Us throws both sharp and sludgy wrenches into the Nails formula. The bandâ€™s third LP expands its sound into more metallic territories--with great force. Normally you hear this kind of language and begin to cringe, expectations plummet, we pray to Beelzebub the band doesnâ€™t focus too heavily on these new ideas. But this is a finely tuned change, adding to a more dynamic style, or as much as one can get in such a chaotic genre. The title, introduction track and â€œViolence is Foreverâ€ stand out with heavy metal focused pulverizing drums and bountiful supersonic wah-shrieks. Less one giant swarm of machine gun toting hornets, and more waves of chrome covered wasps focusing in on an efficient kill. A mighty-morphinâ€™ guitar solo lick also shines through on â€œIn Pain,â€ creating a desire for more pockets of individual flair.

One of Nailsâ€™ most effective devices comes when searing blasts of music fade out to bare flashes of vocal vitriol, they manage to create three of these eyes in the 46 second hurricane, â€œFriend to All,â€ where briefly worded reprieves are arguably the harshest strikes. The ability to halt musically and shift directions like a barreling snowplow doing donuts is also vintage Nails. â€œSavage Intoleranceâ€ drives recklessly, pulls the emergency brake, and finishes the ride with knuckle scuffing breakdowns. Conversely, â€œMade to Make You Failâ€ begins with horn-throwing riffs and ends in haze. Get you a band who can do both.

This hellish excursion ends by entering the 8 minute cave of terror, â€œThey Come Crawling Back.â€ Weary strokes and feedback at the entrance point, fear sets in and the temperature plummets, there are exemplary bass drum bashes in one corner, toxic bass guitar thuds dripping from the ceiling, exasperated vocals drawing you in further. Mounds of sludge build and corrode into chugs. Ringing fills the air that is already hard enough to breathe, and before you know it, youâ€™ve fallen into a hateful abyss, not knowing what will happen next. This tailing off is more mysterious than satisfying, as it leaves you wanting more, knowing you havenâ€™t escaped, everything is left in musical limbo.

The future of Nails? Nobody knows. But they have given us a trifecta of chaotic hardcore albums. You Will Never Be One of Us is driven into madness, ultimately thrown down the well of uncertainty and despair. The LP will burst your eardrums, grind your teeth, and leave you with a twitch in the eye. Given all the mayhem in the world, Nails in no way attempt to explain it, just destroy it. Consider yourselves wrecked.