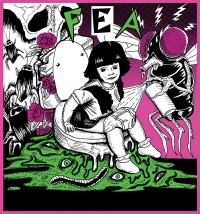 With Sleater Kinney reunited and Kathleen Hannah fronting yet another band again, I think itâ€™s high time that riot grrrl made a comeback in a big way. Thatâ€™s not to say that there hasnâ€™t been any feminism in punk since the riot grrrl movement started to fade away in the late 90â€™s, but even though riot grrrl was generally very loosely defined as simply â€œfeminist punk,â€ other recent feminist punk bandsâ€”most notably War on Women whose self-titled debut exploded onto the scene last yearâ€”donâ€™t have a sound that brings to mind the 90â€™s riot grrrl bands, and thus the words â€œriot grrrlâ€ end up being left out of conversations about them. But Fea is the first new artist in a while that brings to mind the classic riot grrrl style. Feaâ€™s self-titled debut is old-fashioned 90â€™s style pop-punk, but not a style of pop-punk that tries too hard to create big, bouncy hooks. Rather itâ€™s an understated pop style that feels comfortable and satisfied with its own subtlety. Fea adds in a touch of rockabilly, surf, and even a bit of country twang here and there to create a unique sound and switch freely between English and Spanish, creating an intersectional feminism that engages with race in just as daring a fashion as it does gender.

This album first came across my radar because of the fact that it was produced, at least in part, by Laura Jane Grace, one of my punk rock heroes, and I trusted that if she respected Fea enough to have her own name put on the album, it must be an exceptional album, and boy was I right! â€œMujer Modernaâ€ (â€œModern Womanâ€) is a fierce bilingual opener where frontwoman Letty Martinez rages against rape culture. â€œFeminazi,â€ the albumâ€™s first single, is a great response to anyone who fails to understand that â€œfeministâ€ is not a synonym for â€œman hater,â€ and it demonstrates a less-is-more philosophy as the chorus is just one line--â€œI am, I am a feministâ€â€”repeated in five different languages. â€œNo Hablo EspaÃ±olâ€ becomes a powerful refrain in the song of the same name that addresses racism and whitewashing of Latinx history. â€œSister Kâ€ begins with a fun spoken word intro to setup a song about Mertinezâ€™s experience with a nun in Catholic school when she was growing up, and she turns the song into a larger criticism about the Catholic church and how it treats girls, particularly girls of color. â€œLa Llornaâ€ (â€œThe Moaningâ€) is a strange choice for an album closer as, after an album of songs about identity politics, a song that tells a (hopefully) fictional story about a jealous woman murdering her lover and his mistress seems out of place. While I love that kind of darkness in lyrics sometimes, itâ€™s a strange way to end an album that was doing something very different with the rest of its songs.

Fea is about as strong of a debut as one could hope for, offering a pitch perfect revival of the riot grrrl genre with a new spin for a new generation. With the rise of â€œmenâ€™s rightsâ€ nonsense movements and rape apologists in seats of power, 2016 seems like the perfect time for this sort of feminist rage to rear its head again in the punk scene, and Fea finds a way to have a little bit of fun in the process. Fea is an album that signals a strong future for this band, and I excitedly look forward to what theyâ€™re going to do next.