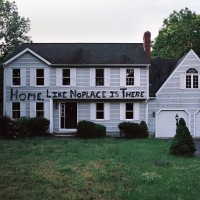 "Wish I was home, oh but no place was there." This album is spilling at the seams with heartfelt lines such as the previously mentioned. Everything feels so personal. Every line and phrase uttered is like that of a man who has gone through a very serious loss. The Hotelier are depressing in every sense of the word. "Your Deep Rest" is one of the most beautiful songs I have ever heard. "I watched you set your spirit free" it brings to mind such a vivid dark image.

So the lyrics are amazing. What about the music? Well this band is from the Emo Revival, with twinkly guitars and punkish fast drums, and heart piercingly personal vocals, although the vocals are not all that great I feel he put every bit of himself he could into his performance, and I love that. Musically they have a similar sound to Brand New and La Dispute. With Brand New's explosive punk-ish moments and La Dispute's mellowpost hardcore instrumentation.

The album has variety, ranging from soft mellow songs such as "House Broken", to La Dispute reminiscent "Life In Drag" and the vocalist's screams are so good all throughout this album, the group vocal chorus on "In Framing" is my favorite moment on the album, along with the very personal depressing lyrics "You climbed out the window your face cold as stone, you lifted the towel the wrist showed the bone" telling the story of a friend suffering from depression and attempts suicide.

Their is an underlining tone of grief littered throughout the album and although not all the songs are about that, it seems they are always directed to a certain person using the phrase "You" a lot. Very rarely do you hear "I' or "me" on the album. It's always directed at someone, fictional or not. The band sounds less like their making an album and more like they're addressing their demons and issues head on.

Overall I love The Hotelier's Second album, and although it may not be for everyone as the singer can be grating at times and the lyrics can be seen as whiny or overly emotional. I'd say if you don't like emo then you should steer clear of The Hotelier because they definitely aren't gonna convert you to the genre.