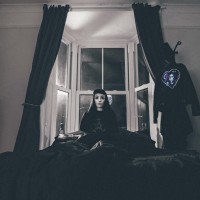 Although I donâ€™t know any horror punk fans complaining about a lack of emo in the genre, plenty of acts have delivered just that. AFI, Alkaline Trio and Aiden have successfully used death, the afterlife and Misfits ideology and made them poppier. Creeperâ€™s The Stranger EP happily carries the torch for the next generation.

The Stranger EP has benefitted from that second wave of horror pop punk. The follow up to last yearsâ€™ The Callous Heart adds better production, more confidence and all around tightness to the band heavily indebted to their predecessors. â€œBlack Massâ€ reeks of Alkaline Trio during its verses before hitting a giant pop chorus a la Foxy Shazam. â€œThe Secret Societyâ€ sounds like The Maine went insanely goth. And try to pick a song that doesnâ€™t have AFI all over it. Singer Will Gould does a spot on Davey Havok (â€œMiseryâ€) but with cleaner vocals able to appeal to All Time Low fans when theyâ€™re sad. Lyrically Alkaline Trio is their closest influence. â€œSo I wrote down a list of coroners, their names, their office phone numbers,â€ is a fun little play on a dark subject before hitting the generic as it is catchy, â€œMisery never goes out of style.â€ It can be sappy. Really sappy, but the musicianship is top notch, making it more rock than performance art.

Creeper aim for the pop punk fast track on this EP. The pacing is all over without ever veering too far from the subgenre, providing a nice array of styles over the five songs. There are plenty of bands that have attempted this before, focusing too much on hair or costumes. Well not these Brits. They do goth pop with the necessary frills in quite an enjoyable fashion.Â

Dan P.: To The Lions