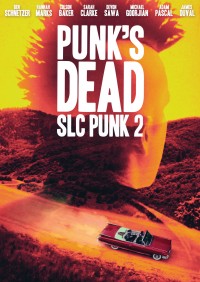 When I was a teenager, I watched SLC Punk! many times. Like many other punk fans, I found it to be such a beautifully succinct snapshot of what the punk movement means, and what itâ€™s like for that movement to be part of your own coming of age story. When it comes to punk movies, everyone else can take Sid and Nancy, Iâ€™ll take SLC Punk! any day!

Itâ€™s been a while since I watched the commentary track on the movieâ€™s DVD, but some parts of it I remember very vividly. At the end of the commentary track, I remember Merendino telling the filmâ€™s star, Matthew Lillard, that the movie represented a very different time of his life, and that he was looking to move on to other things. This is why I was shocked when I heard Merendino announce that he was planning to make a sequel, besides the fact that the original ties itself up in such a tight little bow, and didnâ€™t really call for a sequel.

A look at Merendinoâ€™s IMDB page gives you a pretty clear understanding of why he decided to return to the well: none of the films heâ€™s made since SLC Punk! are anything youâ€™ve ever heard of. SLC Punk! is, by far, Merendinoâ€™s biggest hit.

The film was released straight to iTunes, which, just to be clear, is not the same thing as the new Pee-Wee Herman and Crouching Tiger, Hidden Dragon films being released directly to Netfflix. Itâ€™s about as easy to get onto iTunes as it is to get onto Band Camp. You just have to fill out an application. Hell, even Iâ€™ve had stuff up on iTunes before.

The main character of Punkâ€™s Dead: SLC Punk 2 (or SLC Punk 2: Punkâ€™s Dead, depending on who you ask) is Ross, Heroin Bobâ€™s son. Those who are fans of the original film will probably be asking one very important question right now. For those who havenâ€™t seen the first movie (and spoiler alert here for anyone who hasnâ€™t seen a 17-year-old film that you should have seen already if youâ€™re on this website) Heroin Bob dies at the end of the first film. So how does he have a son, you might ask? Well, one of the last times that he had sex with Trish before he died impregnated her, because that happens all the time.

Michael A. Goorjian returns to the role of Heroin Bob, narrating the film from the afterlife in the most obvious prosthetic bald cap youâ€™ll ever see. Thirty seconds in, youâ€™re reminded of why Stevo narrated the first film instead of Heroin Bob, as Goorjianâ€™s over-the-top, hammy acting becomes cringeworthy when his voice guides the film. Goorjian, unfortunately, is the biggest name that they got from the first film. To almost everybodyâ€™s surprise, Jason Segel became the actor to have the most successful career after SLC Punk!, so itâ€™s little surprise that he didnâ€™t return. Matthew Lillard went on to play Shaggy in the live action Scooby Doo films, after which he became the new voice of Shaggy in all of the Scooby Doo cartoons, as well, and thatâ€™s pretty much all his career is right now. Annabeth Gish isnâ€™t exactly a movie star right now, but her small part in the X-Files meant she probably had a better paycheck coming to her in the X-Files revival than what this film offered (that or she just read the script and, rightfully, turned down this terrible movie).

While the film can get by without the rest of these actors, the premise of Punkâ€™s Dead absolutely requires Annabeth Gishâ€™s character, Trish, so the character was recast with former 24 star, Sarah Clarke. Clarkeâ€™s portrayal of the character is 180 degrees from Gishâ€™s. Where Gishâ€™s Trish was aloof, cerebral, and pretentious, Clarkeâ€™s is more present, more anxious, and a bit more neurotic. To be fair, though, this is supposed to be Trish after 17 years as a single mother to an ex-boyfriend who died of a drug overdose, so I can actually buy that Trish would be a very different person at this point.

So which other actors did they get back from the original film? Basically, they just got some of the smaller, background characters back. Devon Sawa, no longer making Final Destination money, is back as Sean, the hapless punk drug dealer who, in the first film, accidentally took 100 hits of acid by running through a sprinkler system. Sean now reminds me somewhat of myself, as he works in an office job (working for a state senator), but still listens to punk and goes to a show every now and then. James Duval returns as John The Mod, who, after moving to Norway for a while, has become a black metal singer and now runs a black metal shop in Salt Lake City, and now goes by the name Johnny Jekyll. Adam Pascal returns as Eddie, who has now made a fortune off of strip clubs and Internet porn. Not a single one of these people was recognizable to me until the film jogged my memory by cutting back to their scenes from the first film. And thatâ€™s it for the characters returning from the first film. Seriously.

The main plot of the story is supposed to be that Ross, now 17 years old in 2005, is a boy obsessed with death, both because of his fatherâ€™s death, and because he spent his life living above his motherâ€™s death-themed curiosity shop. Ross dresses like a cross between a goth and a 19th century British dandy. As Heroin Bob informs us, Ross is even more straight edge than his father, never having even had a drink (which is not that unusual for a 17 year old, despite what Heroin Bob seems to think). However, after being dumped by his first love (unsubtly named Lilith) Ross decides to throw caution to the wind and start drinking and doing drugs with his punk friend Crash, played by rapper Machine Gun Kelly, and Crashâ€™s friend Penny, played by diamond-in-the-rough Hannah Marks, who actually puts in the best performance of anyone in the entire film. Ross jumps in a car with his punk friends to go with them on a road trip to a punk concert.

Despite the fact that this is hardly the largest rebellion that a teenager has pulled off, Trish panics and calls up the few living characters from the first film that this sequel has managed to scrounge up and, despite the fact that these four characters barely spoke to each other in the first film, they now somehow all seem to know each otherâ€”and Rossâ€”surprisingly well. They assemble to comfort Trish as she panics about her son, and then go after him to retrieve him from the concert.

The film clocks in at only 75 minutes, yet feels like an eternity. Even though the film purports to be about Ross, it spends a disproportionate number of those 75 minutes focused on the minor characters returning from the first film, trying to form a connection between them that never existed in the first film, and which doesnâ€™t really seem likely to have formed in the ensuing two decades. Their scenes feel like a very forced attempt at pushing some sort of nostalgia for the first film on he audience, but it fails completely.

The moments of the film that arenâ€™t desperate callbacks are still not great, but are at least a little more entertaining than anything to do with Trish and the gang. Crash, Penny, and Ross are all charming in their own right. Thereâ€™s a running joke of Crash teasing Penny for being â€œgender deficientâ€ that both falls flat because thereâ€™s nothing unfeminine about Penny, and also comes off as offensive in the era where trans rights has become a mainstream civil rights issue. The moments of Ross not being able to handle drugs and alcohol are pretty much the only real humor in the entire film. The other few bright spots of the film include Pennyâ€™s confrontation with her abusive, alcoholic father, the soundtrack, which includes such heavy hitters as Rancid, New Order, Bikini Kill, The Dwarves, The Violent Femmes, and even David Bowie, and the concert scene, which features live performances from a number of real life bands including Screeching Weasel and The Dwarves. The road trip might have actually worked as its own film if had been stretched out and completely divorced from SLC Punk! Even still, these bright spots arenâ€™t enough to make up for how painfully bad the callbacks to the first film are.

Pure cash-grab, straight-to-video sequels are a dime a dozen. If you check the DVD rack at a gas station, or the bargain DVD section at a Wal-Mart, youâ€™ll find tons of them you didnâ€™t know existed. All of these films are clearly just made to bank off of the name recognition of the first film, and have few if any of the characters from the original film, or else they have all the original characters played by completely different actors. However, these straight-to-video sequels donâ€™t usually have the writer and director of the original film behind them, and thatâ€™s what makes Punkâ€™s Dead all the more hollow and sad. This is a sequel that nobody was asking for, and it fails to recapture the spirit that made the original a cult classic amongst punk fans. Do your self a favor on this one: skip the sequel; just rewatch the original.

Departures: Death Touches Us, From The Moment We Begin To Love