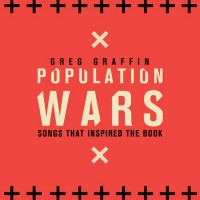 What is there to say about Bad Religion that hasnâ€™t already been said? Theyâ€™re a classic punk group, they make great records (Most of the time at least), they write great lyrics, etc, etc.

But this review isnâ€™t about a Bad Religion album, itâ€™s a Greg Graffin 7 inch, on which Greg and his acoustic guitar play through 4 songs originally appearing all throughout the Bad Religion discography.

The EP kicks off with Faith Alone, originally appearing on the 1990 album Against the Grain. Where the original recording is a solid punk tune, the new version is quite somber. One qualm I have with this version of the song: In the choruses, the guitar in the right ear is put through some sort of pedal that doesnâ€™t really add anything, and distracts from the rest of the song as it feels somewhat out of place. One great thing about this track is the vocal runs Greg throws in the choruses.

The second song is My Poor Friend Me from 1993â€™s Recipe for Hate. There isnâ€™t a whole lot special about this song, aside from the way Greg plays guitar here. The beginning starts off with slow picking of the individual strings but by the first chorus builds up to strumming of the choruses.

After flipping the record to the B-Side, we come to my favorite and lease favorite tracks presented, my favorite being the third song on the record, The Answer. Greg picks the strings individually throughout the entire song, heâ€™s clearly playing on a Spanish guitar on this track, and it really adds to the song, adding an extra prominence to the lyrics. The Answer originally appears on 1992â€™s Generator. The acoustic version of this song is the only one on the entire EP that I feel is far superior to the original.

The last track is Changing Tide, originally the final song on 2013â€™s True North. On True North, the song has a really epic sounding guitar riff, but here Greg sings it, which when he sings the higher part, it comes off kind of awkward. The same guitar effect in the first song is back here, but now it remains throughout the entire song. Itâ€™s unfortunate because this track could have been so much more.

All songs on this record, barring the last one, are somber and depressing, but given the lyrical topics, this makes quite a lot of sense. The lyrics are the standout of all of Bad Religionâ€™s work, but they are often overlooked behind speeding drums and distorted guitars. On this 7 inch, the lyrics are undeniably center stage.

The EP takes you through Bad Religionâ€™s catalog, picking out 4 tracks covering the same topic, â€œPopulation Warsâ€, and playing them in chronological order. Not a necessary release for every BR fan, but worth checking out as it is bundled with Dr. Graffinâ€™s new book by the same name.