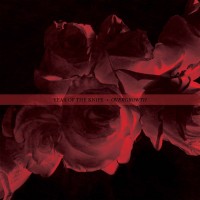 I am always curious to check out some of the lesser known bands that are featured on Philadelphia's annual hardcore festival: This Is Hardcore; many go on to become everyone's favorite hype band and sometimes mainstays in the world wide hardcore scene. Following some positive reviews from this years festival goers, I decided to see what Year of the Knife had to offer. The band features past members of Philadelphia hardcore band Agitator, which increased my level of curiosity.

First of all, Year of the Knife may be continuing in Agitator's straight edge lifestyle, but they are not your average hardcore band. Drawing from influences ranging from Obituary to Disembodied, they play a brand of metal with a distinct 90's metalcore vibe to it. The band combines death metal guitar chugs with Cleveland style breakdowns and a serious dose of double kick. While there are quite a few bands mashing together death metal and hardcore, Year of the Knife manage to come off as a bit more genuine and unique than some of their current peers that tend to leave a bit too much emphasis on big mosh parts.

The music is steady and mid-tempo, which brings me to my first complaint, some of the songs are a little on the long side. The song "Deep into the Night" feels more like two songs put together than a single song, the long mosh part at the end sounds more like it's own song with a long build up that feels like the beginning of the next track. The vocals aren't my favorite, sounding more like an garbled instrument than a human voice (maybe that is a compliment in and of itself), but the delivery definitely requires a lyric book for you to pick out the words for those interested in singing along. These small points aside, the aggressive and heavy nature of the music keeps the relatively ugly styled vocals from taking too much focus from the songs themselves.

Overgrowth is a heavy E.P. from this relatively new and promising band, there are both strengths and missteps, but I think at the end of the day, the strengths outweigh the faults. I'm curious to see if future material continues in a more metal direction, but as of right now, Overgrowth is a good start.Â