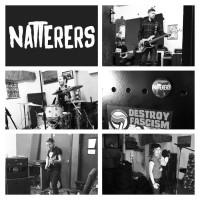 Right away the band brings to mind sonic elements resembling that of Rats In The Wall and A.P.P.L.E., but they also seem to align politically with those bands (and others in that realm) as well because of their very blunt anti-fascist and anti-ecological degradation themes in their lyrics. The track "Make Room! Make Room!" shows that Natterers are not one of those hardcore bands that solely rely on a simple chord progression to be the basis of their songs. Even though there is just a single guitarist, Thomas is able to pull off playing chords while still incorporating these near-haunting fills in between them, which add so much character and uniqueness, not only in this song, but to the other three as well. The guitar playing is somewhat reminiscent of PJ Russo's (of Night Birds) surf-esque style. But if the guitar playing isn't something that first strikes you when listening to this EP, then the leads vocals certainly will. For a hardcore vocalist, you can tell immediately that Emma has a pretty dynamic vocal range. Here screams are aggressive and immediately grab your attention and she is able to hit the center where she is sort doing this melodic screaming. It is not quite singing and it's not quite yelling. Many vocalists try that and not many do it well, but she does.

For a first release Natterers are off to a good start with Demo '16. They have clearly shown that they have the potential to be a standout band within the hardcore scene. Hopefully they will keep developing their sound and keep building up their song writing confidence and then they could very well be on to something.

You can find this EP here.

Year of the Knife: Overgrowth [EP]