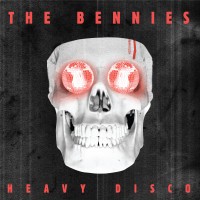 2014 was one of the busiest years to date for Melboure based party/stoner/ska merchants The Bennies. A first ever tour of New Zealand, a second tour of China, Australian dates with Morning Glory, an extensive tour of the U.S including a Fest appearance and opening slots on the NOFX tour, it culminates with the release of a brand new 7", titled Heavy Disco.

As with their last album Rainbows In Space, this high energy 5 tracker was mastered by Alan Douches so, sonically, it's as on point as you would expect.

The ep opens with "Heavy Disco", a no frills, high octane korg infused banger. It's the shortest song on the mini album, but sets the tone of a party-centric, drug themed offering.

"Stay Free" sees The Bennie come as close to an AOR FM Rock anthem as they've come (without sounding like later period Journey) , and that's not exactly pushing the boat out too far for them. Big chorus, bigger guitars.

"Party Whirlwind" & "What's Your Fuckin' Problem?" are two of the catchiest, hook-laden songs that bring to mind classic a third-wave ska at it's best.

Rounding out the all to brief mini album is the dub inflected "Green-Mix City", an ode to, arguably the most (in)famous of herbs, with vocalist Anty barking about his daily routine of waking up, getting baked and partying to a soundtrack of Reggae & Punk Rock.

Those of you who thought the 5 tracks weren't enough can fear not, as due to popular demand after the NOFX tour, Poison City combined this and their previous 5 ep Better Off Dread onto a cd, thus making it a sort of follow-up full-length to Rainbows In Space.

If like your music sans pigeon-hole, but are fond of bands like Andrew W.K, Assorted Jellybeans, Operation Ivy & Mighty Mighty Bosstones, i can't recommend The Bennies Heavy Disco highly enough. If bland, run of the mill is more your thing, put this release down and move along.