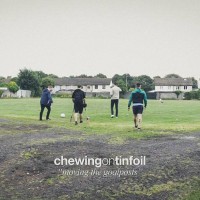 Everyoneâ€™s favourite Dublin punks, Chewing on Tinfoil, have finally released a followup to 2013â€™s stunning Marrowbone Lane. Moving the Goalposts is the name of the new five-track EP, which is up for free download on their bandcamp page.

The EP starts off with lead single â€œCharleneâ€ which immediately clear that Moving the Goalposts is building on Marrowbone Lane, with a similar slow-building sound to tracks like â€œLanguageâ€ or â€œCrosshairsâ€. While some might miss the more overt ska and reggae influence from their first couple of releases, the band have perfected their craft over the years, and â€œCharleneâ€ shows off their ability to write huge choruses.

The rest of the EP follows along in similar style. â€œGive It Upâ€ has perhaps the most ska influence across the EP in its intro - which is bright and bouncy. â€œGâ€™wan Soâ€ is one of the highlights, particularly the build up to its outro, where â€œitâ€™s like weâ€™re a joke, that Iâ€™m not gettingâ€ hits particularly hard.

Closer â€œMarching in Timeâ€ again shows the excellence of the bandâ€™s songwriting. The band are comfortable enough to mess around with structures and manage to write some particularly great bridges and outros. The EP is, in quality terms, almost on par with 2010â€™s Shaving, but musically very different. Itâ€™s a natural progression from their last full-length, and it will be interesting to see what their next LP sounds like.Â