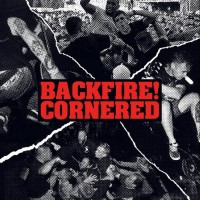 European hardcore has been represented by some impressive releases so far in 2016, and the Cornered and Backfire! split 7" is another solid release to add to that growing list. While this 7â€ is quite short, clocking in at less than 5 minutes in length, it still packs a hefty punch.

Cornered have continued to push themselves with this impressive metallic tinged hardcore track. With thrash influenced guitar chugs, creepy leads and heavy breakdowns; â€œTime Has Comeâ€ will get mosh fans moving. â€œTime Has Comeâ€ has a slightly more Cleveland vibe to it with clear Integrity and Ringworm influences, although vocalist Niels keeps it from becoming worship with his clear shouted vocals. The vocals on this track sound quite similar to Death Threat, but feature a cleaner delivery, which helps to push this song as the stronger of the two on this split.

Backfire!, who are fellow Dutch hardcore mainstays have had a long and impressive career. Since forming in the early nineties they have toured with countless legendary hardcore bands including Madball, and Warzone, and it shows in â€œMosh Minableâ€. The Backfire! offering has a more straightforward old school hardcore vibe. It is angry, fast and straight to the point. While I prefer the style of Cornered slightly more so than Backfire!, â€œMosh Minableâ€ is still pissed off European hardcore with the credentials to back up the attitude.

I do typically prefer to have at least two tracks per band on a split 7â€, especially considering how short both of the songs are I think more would have been gained with a second song from each band. Despite the extremely brief duration of this 7â€ both bands have offered up very capable and solid hardcore songs. I think the combination of the two bands compliment each other nicely. This release has succeeded in increasing my anticipation for Corneredâ€™s upcoming full lengthÂ  Â Â