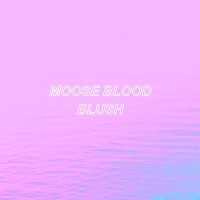 When Moose Blood came out with Iâ€™ll Keep You In Mind From Time To Time, it broke some sort of new ground for emo and pop punk. The band had created something fresh out of the influences of bands like Brand New and Taking Back Sunday. With so much anticipation from Moose Blood, the pressure was definitely on for the bandâ€™s sophomore album. The band signed to Hopeless Records in April and debuted a poppier song than what fans were used to. Blush is the progressive next step for Moose Blood that finds the band into prettier, poppy territory.

To start, the aesthetic of the recordâ€™s layout and tracklisting is formatted to fit the sound and mood of Blush. The band have created their own pink overtone that makes the simple cover of the album more appealing. Every track is one word long and reads almost like a poem.

Blush starts on a positive note with an upbeat track about being and feeling better with a girl even though theyâ€™re far apart at times. The song, â€œPastelâ€ introduces the setup of the album nicely and gives fans a notion of what to expect. â€œHoneyâ€ is where the band hits home. Moose Blood was smart to release this song first as not only is it extremely catchy, but it also showed the progression of what the band is capable of past their debut album. â€œSpringâ€ is a chilling song about death that certainly takes the band into new territory with atmospheric sounds and drums. Think â€œCherryâ€ with a full band and a darker vibe.

While some fans might be disappointed about the slight change in sound, Moose Blood has proven that they are capable of writing more than one great record. Iâ€™ll Keep You in Mind, From Time to Time definitely set a new precedent in the genre, but fans wonâ€™t be disappointed by the change and the more melodically upbeat songs that are just as personal as their debut. The songs hit close to home and you can tell they mean a lot to the band as the lyrics match the tone of every song.Â