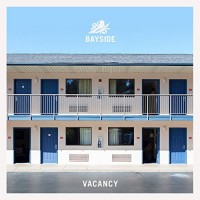 â€œI canâ€™t believe this is my lifeâ€ Anthony Raneri croons in the chorus of â€œPretty Vacant.â€ Itâ€™s a defining line that creates the backdrop of the misery that is Baysideâ€™s new album, Vacancy. Much of the album was written up after Raneriâ€™s second marriage ending. Locked away in a hotel room with his guitar, the bare bones of Vacancy came alive.

The album is pretty dark throughout sounding like a mixture of Killing Time and The Walking Wounded. The album has all the ingredients for a Bayside record but incorporates some newer sounds influenced by Raneriâ€™s solo career and their previous album, Cult. But it's all there, the melodic palm muted verses, the gripping solos and clever choruses that embody the best of Bayside. Thereâ€™s anxiety in the tune of â€œNot Fairâ€ while â€œMaryâ€ is an upbeat folk song thatâ€™s carried by its vocal melody.

While its not the bandâ€™s darkest lyrical content, itâ€™s pretty damn relatable. The album accounts wanting desperately just to be in a room with his ex-lover in â€œThe Ghostâ€ or the idea of wasting your days in depression on â€œIâ€™ve Been Dead All Day,â€ then thereâ€™s the coming to terms with a divorce and what comes with it on â€œMaybe, Tennessee.â€ Not that this is new for Bayside, the band has touched on so many subjects in the past but this album seems to have somewhat of a different theme than the past. The album embodies feeling hopeless but overall realizing after all on the albumâ€™s closer, â€œItâ€™s Not As Depressing As It Soundsâ€ that well, itâ€™s not as depressing as it sounds.

Once again, Bayside prove that they arenâ€™t done yet and continue to knock out albums with gut wrenching content in their own style of music. Bayside has pretty much become their own genre in the 16 years that theyâ€™ve been a band and Vacancy is no exception. Fans will definitely find some songs on this album that are relatable and catchy. While some songs feel not as strong as others, the album still holds up for a front to back listen.