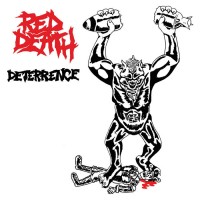 Red Death are Washington D.C.â€™s answer to D.R.I. style cross over. The bands most recent offering is two song 7â€ Deterrence; while there are only be two songs, both tracks pack a hard hitting punch.

Deterrence brings to mind a few classic bands including D.R.I., COC, and Cryptic Slaughter, as well as current bands such as Power Trip and Rival Mob. Red Death highlight the speed and guitar licks of thrash metal, as well as the straightforward snotty attitude of hardcore punk. The songs are quick and to the point, and might be some of the better current cross over material I have heard in quite some time. That being said it is tough to judge with only two songs.

The production value of Deterrence is definitely a nod to the thrash metal greats of the 80â€™s, with a lot reverb and drums that sound as if they were recorded in an ice cave. It is current music that is meant to sound like it came out in 1985, which isnâ€™t my favorite concept, but Red Death pull it off in a way that avoids being overly redundant or cheesy. The band isnâ€™t reinventing genres or pushing the metal envelope, but what we are left with are two fun circle pit inducing thrash songs that could please both the old metal head and current hardcore fan.

This release should please both fans of hardcore and metal and is a strong release for Red Death. It is tough to objectively judge a band on two relatively short songs, but they have provided two quality bangers that leave me very curious for future releases.Â

The Misfits: Friday The 13th