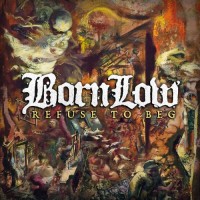 InÂ 2004, No Warning released Suffer, Survive, the end result of a heated match ofÂ grab assÂ with Linkin Park's Mike Shinoda.Â And we all lied to ourselves that it was a great record because the bandâ€™s previous LP, 2002â€™s Ill Blood was such an absolute juggernaut. Ill Blood was more Madball than Madball and, along with Lowest of the Low, it helped define an era of hardcore by throat-punching Poison the Well and the rest of the singy-screamies into the Hot Topic clearance bin. Suffer, Survive was such a letdown that it didn't just drop the ball, it chucked it into the yard with the mean dog and the old man who shoots trespassers. Who would bear the torch of back-to-basics, real-deal hardcore now?


American Nightmare and Blacklisted started strong, but they soon devolved into pseudo-goth meanderings only suitable for people with head injuries. Then there was Guns Up! (exclamation point not mine), a suitable contender to be sure, but those Louis Vuitton and Nike rip-off tees didn't do them any favors. And Terror and Hatebreed? In a class by themselves. And of course, there has always been and always shall be Madball, but you can only listen to Set It Off so many times before you start itching for a new take on the old school.

In 2010, Albany, New York's Born Low dropped Reincarnage on Reaper, a criminally-underrated ass-beater of a record. With big stompy, breaks, unbelievably raw vocals, and a bass tone that sounded like your ears getting whipped with a chain - these guys took the Ill Blood formula and cranked it up into purely bestial territory. Refusing to succumb to the weakness of a sophomore slump, they followed Reincarnage in 2012 with The Hunger Within, the auditory equivalent of a sledgehammer cracking the fuselage on a 747. And when you're already this good, the third time isn't a charm, it's inevitable.

Born Low's newest EP, 2014's Refuse To Beg, is their best yet: six brand-new tracks that are sure to inspire wanton pit reprisals. While I can't conscientiously condone show violence, I can at least admit that in the face of such pure metallic-hardcore supremacy, I shouldn't be held responsible for my own actions. "Nobody Move," "Just How Real," "Die Down"? This is the stuff of hardcore legend. And "When the Coffin Drops" could possibly be the band's finest hour. Uncompromising, unrelenting, overwhelming New York-influenced hardcore.

And here you thought TUI and Turnstile was the absolute best Reaper has to offer. Sure, it's all a matter of taste, but I personally find so much more to connect with in Born Low's under-hyped, no-frills approach. If you're like me and you've still got Ill Blood on a twice-weekly rotation, do yourself a favor: put on a helmet, take a couple of deep breaths, and Refuse To Beg.Â