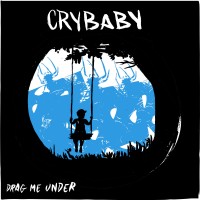 As soon as you hear the singer's quivering, overly-strained vocals you get the sense that Crybaby knew exactly what they were going for when they picked out their name. They have no illusions about sounding like the auditory embodiment of Michael Cera and the fact that they embrace this awkwardness is what gives them their charm.

On their first proper full-length, Drag Me Under, Crybaby continues to hone their mishmash of lo-fi emo and slop-punk which lands them - sound wise - somewhere in the neighborhood of Archers of Loaf having a slap fight with the Impossibles. Most of the songs clip along at a ramshackle, mid-tempo pace, punctuated by a generous amount of feedback and jangly guitar noodling. At times, Crybaby sounds like they're barely holding it together. But this seems like an intentional move because it gives the songs a sense of urgency and a "who gives a ----" kind of feel. And every time the band sounds like it's going to shake itself apart, the drums and bass always kick in to groove things right back on track.

Crybaby combines a calculated dorkiness with over-the-top, darkly sarcastic lyrics to give their band a sense of humor that so many of their peers lack. It's this self-deprecating attitude, along with a big bag of catchy, sing-a-long choruses that make it much easier to overlook some of Drag Me Under's minor missteps.