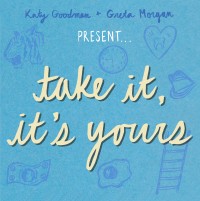 Itâ€™s a daring scheme to render classic punk smashers in a non-bombastic context. In doing so, the question is, â€œDo these landmark tunes derive their power from their exterior peril or from their inherent structure?â€ (Especially at Punknews,) weâ€™ve all heard the punk-guy goes acoustic-singer-songwriter many, many times and the olâ€™ â€œand now I will do my old songs in a stripped down styleâ€ usually winds up as â€œyeeeeeech.â€ So, it takes a deft musician to take, oh, say the Stooges, out of the hands of the Ashetons and put them into the hands of pretty much anyone else. So, thereâ€™s a certain audacity in Katy Goodman and Greta Morgan taking ten punk classics and not only spinning their own versions, but also stripping these songs back from hyper-charged electric rockers to spacey, mournful, melodies.

Itâ€™s a testament to both the women and the songs here that this gambit works so well. To be frank, Goodman and Morgan have been punking/indie-ing it up for over twenty years between them, so they know what theyâ€™re doing. In fact, maybe now is the exact perfect time for them to try this out. Theyâ€™re at the point in their careers where theyâ€™ve each had some great success, have mastered their respective styles, and have each developed a musical identity. But, neither has been at it so long that theyâ€™ve fallen prey to routine. So, in taking a turn at these songs, the gals are able to deviate from what youâ€™d expect them to do, while still making this an unidentifiably Goodman-Morgan record.

Check out the killer take on â€œPay to Cum.â€ H.R. would zip-zap-zip though that song so quickly that his vocals sounded more like a Gatling gun than someone singing. Goodman goes bold and pulls waaaaay back on the break. But then, she shapes the lyrics into a sort of growing vine. Listen to how she weaves, â€œI MAKE decision WITH precision / lost INSIDE this MANNED collision.â€ The take has the masterful craft of Carol King applied to a song about fighting against government oppression. Itâ€™s actually a really fitting spin, if you think about it.

Look to the Morgan fronted â€œI wanna be your dog.â€ The duo completely tears the song down and then Morgan uses her sultry voice to affect a sort of ambiguous manifestation of the tune. This, too, is am artful swing. People always assumed that the original version was about Iggy wanting to get dominated. But, years later, Iggy quite nonchalantly mentioned that the song was about â€œDoggingâ€ someone, completely flipping the songâ€™s meaning- but then again, Mr. Pop canâ€™t always be trusted in his interviewsâ€¦ So, Morgan, with her golden age-of-film serenade style, supported by Goodmanâ€™s angelic backing vocals, doesnâ€™t let on at which character sheâ€™s playing. Itâ€™s almost as if the song knows more about you then you know about the song, depending on which angle you pick.

Likewise, these radical takes also show how strong this source material is. No doubt, some of the power of â€œWhere Eagles Daresâ€ comes from Danzigâ€™s grim menace and Jerry Onlyâ€™s muscleman bass. But, even with the beat-down aspect removed, the song still retains its original aggression. Such is the power of Danzig (and Billy Idol, and Greg Sage, and etc etc etc) that these tunes are titanic in whatever form you find them.

It takes a surgeonâ€™s hand to completely cut apart classic tunes and still keep them vibrant. But, the three entities here are no schmucks â€“ Goodman, Morgan, and the tunes themselves. The resulting experiment allows us to learn about both sides of the equation. With the tempo slowed and a new texture applied, these songs each have a deeper meaning than was apparent at first. But also, Goodman and Morgan, who are known for constructing beautiful, if sometimes melancholy, tunes, are just as adept at breaking them down to their core components. At the end, weâ€™re left with something quite different than the beginning. Where we once had two musicians paying tribute to their heroes, we now have two musicians demonstrating showing us how the masters do what they doâ€¦ and by â€œmasters,â€ we must mean both the composers of these ten songs as well as the two women putting these compositions to use.