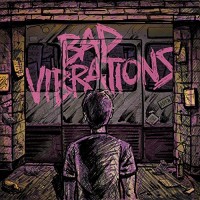 A Day To Remember will always be one of those bands whose fans attack each album passionately based on how they change their sound. Whether it's Homesick or For Those Who Have Heart, I'm one of those who managed to appreciate all their records. Even the ones I didn't like at first ended up growing on me. Songs like "All I Want" and "The Plot To Bomb The Panhandle" (and yes, even their Kelly Clarkson cover) are all guilty pleasures. Bad Vibrations finds them assembling styles from each album, addressing the different eras they went through, and basically summarising how their catalog stacks up. On this particular album, they achieve just the right amount of flair and flavour to spice things up with character and believe it or not, lyrical depth. Track-wise, there are some growers. Then you've got some tedious chores to work through mid-way but overall, the album ends on a fairly decent note.Â

I'd like to say Jeremy McKinnon's all vintage here (borrowing from WWE's Michael Cole) but he doesn't sound as smooth and clean as their early days. Sure, tracks like "Bullfight" wanders around Panic at the Disco! and Fall Out Boy territory but there's a nice air of aggression that builds -- no surprise NXT gobbled them up. The raw flow a hardcore breakdowns, when smooth, are really fucking slick (think of stuff like The Ghost Inside). In terms of hardcore punk bridging that gap with metalcore and mainstream appeal, look no further than "Paranoia" and "Bad Vibrations". These are heavy, catchy and pull off really well. Usually, being the old fuck that I am now, I'd have issues with songs like this (for those pesky kids) but ATDR nail it. The writing's socially relevant and very personal so additional kudos there.Â

It takes a while for them to slow the pace down later on with a pop-punk snapshot coming in the form of "Naivety" -- all for fans of Sum 41. This band is offered a lot of tribute on the record as well as Blink 182, with ATDR spinning their own angry twist on things. When all's said and done, ATDR don't knock it out the park. Nonetheless, it is what it is. They secluded themselves to write something heavier, talking about their love for the scene and the people, and the stress of musically evolving. The anxiety's brought out well-enough out by producers Bill Stevenson and Jake Livermore who polish up beyond the bare minimum. They've done enough to please old fans yet chart a course forward for the Hot Topic/Warped Tour kids that no doubt will help them in social media wars against Victory Records. More so, they'll keep buying merchandise. I heard a friend once say that ADTR are no longer about art and are just a product. Well, for what it's worth, this is one of those rare occasions that gets a hall pass. Not the best but not a travesty. High-school me would be having a field day.Â