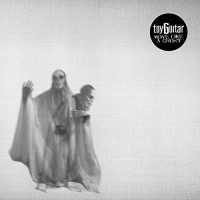 It became quite clear that Jack Dalrympleâ€™s newest musical venture toyGuitar was here to stay when the band released their fantastic first full-length In This Mess in 2015 about a year after they released their debut self-titled EP. What was also made very clear was that toyGuitar was a totally different animal compared to his other projects like One Man Army, Swinginâ€™ Utters, and Dead To Me. toyGuitar is not the aggressive punk rock we heard from Dahlrymple like on Cuban Ballerina or Dead End Stories. This band is much more on the garage/pop punk side of the spectrum and if In This Mess shows us anything, it is that Jack Dahlrymple is an adaptable song writer who can produce great music regardless of which band he is focusing on and Move Like A Ghost is no exception.

This EP goes in the direction where fans of the bandâ€™s previous work hoped they would. The keep their garage and pop punk mixture while adding some new characteristics â€“ the most obvious being the surf influence. Move Like A Ghost begins fast and loud with â€œPeach Fuzz,â€ where you can hear Jackâ€™s harsh screams and then it ends slow and soft with â€œTurn It Around,â€ where Jackâ€™s vocals are much more laid back, but still powerful at the same time. Both songs really exemplify just how wide his vocal range has gotten.

But really it is the title track specifically where you hear toyGuitar at their absolute best. It encompasses their overall sound in one song. They are extremely tight and each musician is doing their part incredibly well. They are just one well-oiled machine here. Jackâ€™s vocals are on the more relaxed side and they still transition back into these very high â€œoohâ€™sâ€ and â€œaahâ€™sâ€ during the instrumental bridge that compliment it quite well. It is also Miles Peckâ€™s impeccable surf guitar-esque leads most notably in that build up/bridge that really gives this song that extra boost. During a first listen it isnâ€™t exactly clear where that part is going to land, but once it is over you realize that they wrote it just right for an extremely satisfying finish. The guitar leads he contributes add ton of character to the entire release and definitely make the songs on Move Like A Ghost stand out from the ones on In This Mess Rosie Gonce also deserves some recognition for here drum work on this song this and through out the EP. Three releases in with this band and she continues to be show that she is a very talented and reliable drummer.

toyGuitar have absolutely nailed it with Move Like A Ghost. It is a great follow up to such an amazing full-length. Though Jack Dalrympleâ€™s latest musical endeavor is still relatively young, it is absolutely clear that whenever he is involved the tunes are sure to be awesome.Â

You can find this EP here.