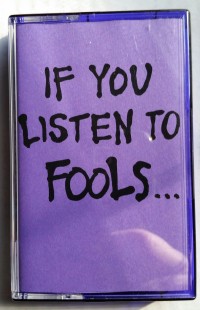 The Mob is back with a new cassette-only EP of pure sonic destruction. This time around, we get a mere four songs which is the only bad thing I can say about If You Listen To Fools. Not much has changed since the bandâ€™s 2013 full-length on Rev (Mob Justice): this is pure, unadulterated no-bullshit hardcore in its most primal form. Like what Breakdown or Think I Care would have sounded like on a diet of raw meat and steroids.

â€œSpeak With Powerâ€ starts things off in typical Mob fashion: like a brick tied to the end of a fist. â€œE.F.K.â€ is a breakneck destroyer, picking up the pace before nosediving into the plodding animalistic beat down of â€œOx Must Plow.â€ The former is a cover, originally by the now-defunct Boston outfit Rampage, off of their 2007 Lockinâ€™ Out release Limit of Destruction. And do the Mob ever do this track justice. Wrapping things up is â€œI Want To Be Victimized,â€ a fist-pumping, street punk anthem.

If the bandâ€™s 2009 LP Raw Life wasnâ€™t enough of a clue, â€œrawâ€ is the word of the day in regards to The Rival Mob. From Brendan Radiganâ€™s throat-shredding vocal delivery, to the intended-primitivism of the bandâ€™s music, listeners can always count on a visceral experience from The Rival Mob. Some bands are formed with the intention of leaving their roots behind. But there are others that are perfectly content to stay in the trenches with the rest of us, doing justice to a sound that they love.

Signals Midwest: At This Age