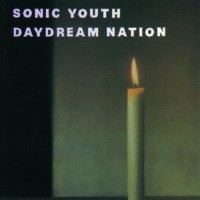 The first and only time I ever got to see Sonic Youth perform was back in 2007. They were 20 minutes late to the stage with Kim Gordan arriving last and apologizing for â€œbeing a girlâ€. They then opened with â€œCandleâ€ and ripped through it with speed and ferocity. I didnâ€™t make out the song at first because it was going at a blistering pace, but once it hit that iconic Sonic Youth sound during the bridge, (those twangy guitar tones), I remembered where it came from.

It came from Daydream Nationâ€¦

This is a double album. Itâ€™s a hallmark in the indie/punk scene and sits right alongside other notable double album works as Zen Arcade and Double Nickels on the Dime. What separates it is simply a matter of organic feels. The same can be said of what HÃ¼sker DÃ¼ and the Minute Men did in their own time and place, but Daydream Nation has this feel about it that can only be heard if you live through it somehow.

Donâ€™t get what Iâ€™m saying? Well I tried it this wayâ€¦

I visited New York City for spring break in 2008 during college. I chose to only listen to artists from NYC. Nothing else was going to be my weeklong soundtrack. I jammed many bands, but Sonic Youth were the ones I held close to my chest.

Thereâ€™s something honest about music narrating your travels. I walked past graffiti strewn alleys and neighborhoods while jamming â€œThe Sprawlâ€. The last of that tracks instrumentation causing a filter on the once grungy looking sidewalks that now looked more clean. â€œCross the Breezeâ€ kept pace with the busy traffic, seeing each car move like they were connected on an electric toy track. The guitars, still evoking that old school Post-Punk sound, evoke an angsty menace while I got on and off the subway cars and walked up and down steps onto the streets.

The city was going under heavy gentrification, and still is, but â€œSilver Rocketâ€ cut through that like a knife through a veil. And of course there was the Pyramid Club and the 80â€™s night party they were having. I danced to The Cure, Joy Division, The Smith, and INXS. Why didnâ€™t the dj play any Sonic Youth? Werenâ€™t they a part of this city too? Didnâ€™t they make music in the 80â€™s?

I was drunk on scotch/soda and cheap beers. I tried to walk back to the hostel. â€œEricâ€™s Tripâ€ was running through my mind and I was in a daze. This wasnâ€™t an LSD trip, imagined and sung by Lee Ronaldo in a rare moment, but still I felt like I was in a tube slipping awayâ€¦

Daydream Nation carried on and seemed to not give up.

â€œTotal Trashâ€ careened like a shuffling zombie with Thurston Moore singing, â€œNever mind it now / We can bring it back / It's total trash / And it's a natural factâ€¦â€. Leeâ€™s second number, â€œHey Joniâ€, with springy guitars and bass, even has a deep cut reference to Neuromancer by William Gibson. The Art-Punk never left and a track like â€œProvidenceâ€, combing piano and old grainy voice recordings of Mike Watt calling from a pay phone showcases the bands tendency to be weird, yet pretty when wanted.

Once I came to the aforementioned, â€œCandleâ€ things hit home. â€œI see a falling snow girl walking Broadway / Turns the corner at 14th and I know there's no way / It's alright / It's alight candle / And I know she'll be okay by Sundayâ€¦â€. Drummer Steve Shelley is the hidden key on this entire album. His drumming was perfection and certainly bursts out with full force on every track contained here. Heâ€™s no slouch, such as the constant buildups going back to opening track â€œTeen Age Riotâ€. Little is left to grasp. This band was on theÂ razor it seemed and you can hear that clearly on this album. I felt like I was also on that razor.

â€œRain Kingâ€ is the third Lee song on the album, reminiscing of their old No-Wave days with aplomb in the face of a concrete city. He sings like heâ€™s about to break, or at least be defeated by some force and itâ€™s an emotional experience. â€œKissabilityâ€ was a welcome listen since Kim was again on main vocal duty. She seemed like a cool tour guide, but of course things fall apart when Sonic Youth goes full on punk mode and thrashes the song apart like two dogs ripping a cat in half. Kim gets angrier, singing lines like â€œYou're driving me crazy, I feel so sickâ€. Iâ€™m sorry Kimâ€¦

And then thereâ€™s the 14-minute final track, â€œTrilogy: a) The Wonder, b) Hyperstation, c) Eliminator Jr.â€ I felt like the trip to NYC came to an end once this song finished. It goes off like a rocket, explodes in the atmosphere, then come crashing back down. â€œTrilogyâ€ is one of many epic Sonic Youth tracks that exceeds the normal running time a â€œpunkâ€ band makes for a tune. This is where the live version of Sonic Youth got captured on tape. Sonic Youth's live shows had so much improvisation that fans wanted it on a record setting. Itâ€™s one of those final part of the show type moments. I left NYC feeling like I just got out of a basement gigâ€¦

Daydream Nation isnâ€™t for everybody. Itâ€™s a demanding album that asks for the listenerâ€™s attention. Itâ€™s almost like a coursework album these days in indie rock 101. You hear about it, and you might recognize the artwork, but have you really listened to it?

This was the last independent album Sonic Youth made. They signed to a major label afterwards, released Goo and rode the alternative music train for a long while. Still, that doesnâ€™t diminish the effect this one album had on the underground music scene. Itâ€™s a masterpiece. Dig itâ€¦