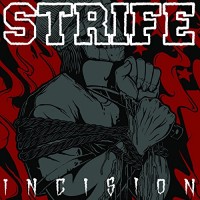 Strife has been my favorite hardcore band ever since I saw the music video for â€œIn This Defianceâ€ on the Cinema Beer Nuts VHS tape back in 1997. I was only in the eighth grade and Iâ€™d never seen that level of ferocity and righteous anger in a band before. I went right out and spent my allowance on In This Defiance at the local record store and for weeks I listened to it probably six times a day. Once I started playing in my own bands, we would always keep a Strife cover in our repertoire. When the band dropped Angermeans in 2001, I was a little put off by the high level of experimentation, but I wore my copy out nonetheless because I still loved their intensity so much. And when they broke edge, I didnâ€™t care, but when they broke up, I was devastated. It took until 2012, but Strife got back together and (mostly) returned to form with their comeback LP, Witness A Rebirth. The record was good, but it was no In This Defiance. Then again, few things are.


So my interest and excitement were piqued when I heard Strife was set to release a new four song EP that boasted â€“ of all things â€“ a Cleveland hardcore inspiration. Riff-wise, Strife always had some basic similarities to early Ringworm and Integrity, so it seemed a good idea in theory. But in execution, Strifeâ€™s newest, Incision, leaves a lot to be desired.

My biggest problem with Incision is its sluggishness. The riffs do sound â€œClevo-fied,â€ but not in that breakneck speed, Hell On Earth sort of way. Most of the record plugs along at mid-tempo, sacrificing speed for heaviness. But the heaviness never really comes. Thereâ€™s a simplicity to these songs that doesnâ€™t feel genuine. Iâ€™m loathe to say it, but it makes Strife sound theyâ€™ve run out of song ideas. By the same token, three originals and an out-of-left-field Black Flag cover doesnâ€™t do much to dispel this notion either.

There are a few bright spots on the EP, aside from Rick Rodneyâ€™s always-incredible vocals: Clevo-hardcore alumni Human Furnace (Ringworm) and Aaron Melnick (Integrity, In Cold Blood) make vocal and guitar appearances â€“ respectively â€“ on the title track. And Igor Cavalera (Sepultura) plays drums on one of the songs, but I couldnâ€™t tell which one. Strife arenâ€™t strangers to this type of collaboration. In the past, Chino Moreno of the Deftones and Eric Bobo of Cypress Hill have appeared on their records. I did enjoy the guest spots, but they would have felt less gimmicky if the band had turned in a more engaging EP.

Strife will always be my favorite hardcore band because I connected with their music at the perfect time in my life. I spent many an hour picking out their guitar riffs by ear and even more hours channeling their influence into my own bands. Iâ€™m not proud of my lukewarm response to the bandâ€™s newest recording, but this doesnâ€™t make Incision any easier to enjoy. Hereâ€™s hoping Strife still have another full-length in them somewhere. If that record is ever released, I know my desire to hear the same desperation and rage I heard on In This Defiance will have me listening with an unbiased ear.