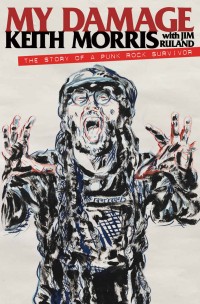 Perhaps the most interesting thing about My Damage, Keith Morrisâ€™ new autobiography, is that the OFF!/Circle Jerks/Black Flag frontman reserves the sharpest barbs for himself. As the book makes clear, the early LA punk scene wasnâ€™t always the nicest place and the people that hung around the scene werenâ€™t always the nicest people. Further, that initial scene recedes into the mid 80s, Morris runs across shady record labels, spiteful girlfriends, and people who just seem cruel. Yet, whereas many writers would use the space to paint themselves as victims or launch into attacks against former bandmates, Morris is usually content to skewer himself.

He dwells on bad decisions he made in his bands. He accepts responsibility for getting a little too into the weasel powder. He even chides himself for being distant to certain girlfriends. This position serves an interesting function- first, we learn that Morris isnâ€™t interested in making his book a straight up PR piece. Second, it shows that Morris has grown throughout the years. Instead of giving us some corny, redemptive speech at the end, Morris shows his growth through action, which really, makes a more interesting character study than having the bookâ€™s meaning simply handed to you. Third, it makes Morris, with his rapscallion demeanor, even more likeable. Morris might have fronted three of the greatest (and nastiest) hardcore bands, but heâ€™s not interested in pretending that heâ€™s something heâ€™s not.

Co-written with Jim Ruland, the book is a breezy read. Often, it feels like hanging out with Morris while Morris recounts his adventures. Rutland chooses to edit out those famous Morris never-ending segues (i.e. that time he was asked about Bill Stevenson and wound up talking about how great burritos are). Itâ€™s probably the right choice. While those famed diversions make Morris interviews something of legend, for the book, when we are getting down to the meat of the matter, itâ€™s good to stay on topic.

Morris gives equal weight to all of his era, from his childhood, to Black Flag, to the rise and fall of the Circle Jerks, to his musical redemption via OFF!. Wisely, Morris weaves the well known stories (i.e. the famed Black Flag Pollywood park gig) with unknown stuff, such as the lifestyle of his fist fighting biker dad and that time he flew out to the Netherlands and almost died. Itâ€™s a real kick to read about Keith scamming the family cash register or about how he used to love working at a local pancake house.

Of course, the entire read, an ominous character hangs in the background- that tall, skinny genius named Greg Ginn. Morris might take a stray shot here or there, but one does wait for the frontman to really set Ginn in his sites. Instead of rolling around in the mud, Morris focuses more on himself and his failures and achievements. Maybe thatâ€™s the way to play it. He doesnâ€™t need to devote a chapter to what a dick Ginn is- we all already know this. Instead, the proof is in the print. Morris knows that we know who is a jerk and who isnâ€™t.

The result is a portrait of a famed frontman that is complex but earnest. The battle is already over and itâ€™s clear who won. The book serves as a monument to this by almost avoiding the battle altogether. Despite castigating himself, Morris comes out cleaner than anyone and this only further proves why he has endured when contemporaries have faded away, died, or sabotaged themselves.

Dan Vapid: All Wound Up