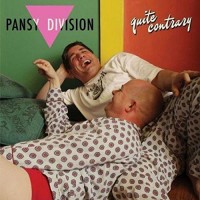 I think there are a lot of punk bands that never break up, they just enter into this state of semi-retirement. The band is no longer their top priority, but they still put out an album every now and then, and occasionally put together a short tour. Pansy Division seem to have entered into this stage, this being their first album in seven years, and their second in 13 years. But however long weâ€™ve had to wait, the kings of queercore are finally back!

Pansy Divisionâ€™s contribution to the fight for LGBT equality has traditionally been to write lyrics with graphic details about gay sex to force the straight world into dealing with the realities of homosexuality. Over the years, Pansy Division have taught us a lot about gay male sex, and taught us colorful new terms we might not have known about otherwise. â€œAlpine Skiingâ€ comes to mind as a particular favorite of mine. But on Quite Contrary, the boys have gotten a little older and mellowed out a bit. The second track on the album, â€œLove Came Along,â€ essentially sets the scene for the rest of the record, as the band that once told us that people who claim to be looking for love are really looking for â€œsex, sex, sex, sexâ€ now eat their words as they sing about falling in love, settling down with one man, and giving up the promiscuity of younger days. Quite Contrary might have gotten its name for this very reason, because itâ€™s an album thatâ€™s focused much more on love than on sex, as well as on growing older, as evidenced by the song â€œ(Is This What Itâ€™s Like) Getting Old.â€

Despite growing up a bit, the bandâ€™s sophomoric humor remains, such as the little skit in the middle of â€œYouâ€™re on the Phoneâ€ which almost ruins an otherwise wonderful song. Pansy Division biggest flaw is that they never seem to feel comfortable unless theyâ€™re making people laugh, which is a shame because theyâ€™re always successful with more serious material. â€œBlame the Bible,â€ the albumâ€™s first single, reminds us that, everything else aside, this is a punk band, as the band gives the most angry political diatribe of their career, and literally call for an end to all religions. Its (forgive the pun) spiritual sibling song, â€œItâ€™s a Sin,â€ packs a pretty big wallop as well.

Even though the album can devolve into silliness at times, itâ€™s still a pretty strong effort. I always like it when a band can admit that theyâ€™ve grown up and even grown old, especially in a genre as youth oriented as punk. That takes a lot of courage, and Pansy Division show a lot of that on this album. And where their previous work sought to teach us that sex songs donâ€™t all have to be about heterosexual sex, Quite Contrary does the same for thing for love songs. In a time where hate is growing and spreading in this country, the reminder that all people love, just in different ways, is something we all need to keep in mind.