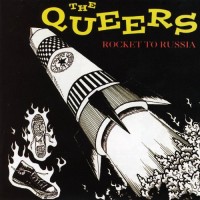 In the early 90â€™s, someone got the bright idea to release cover versions of complete Ramones albums. The now defunct Selfless Records put out the first three between 1992 and 1994. They featured Screeching Weasel, The Vindictives and The Queers, three of the biggest names in pop-punk at the time. The Queers handled Rocket to Russia, the last perfect Ramones album and the last one to feature Joey, Johnny, Dee Dee and Tommy. The new version was produced by Ben Weasel. This brought the whole collection full circle, as Screeching Weasel started the series by covering Ramones a couple of years earlier.

Joe King has stated that they didnâ€™t rehearse in advance, and that they knew there was no way to improve on the originals. The Queers just tried to recreate the songs to the best of their ability. â€œSheena is a Punk Rockerâ€ and â€œDo You Wanna Dance?â€ feature slightly different vocal arrangements, but thatâ€™s about it. Joeâ€™s voice is very well suited to this material, especially the poppy stuff like â€œHere Today, Gone Tomorrowâ€, â€œLocket Loveâ€, â€œRamonaâ€ and â€œ Why is it Always This Way?â€ Thatâ€™s not to say that he canâ€™t up the snotty attitude for tracks like â€œWeâ€™re a Happy Familyâ€ or â€œTeenage Lobotomyâ€. Ben Weasel even lends his nasally but distinctive vocals to â€œSurfinâ€™ Birdâ€.

Love Songs for the Retarded was the only other Queers LP available when Rocket to Russia came out. Allegedly they didnâ€™t want to do it, but it helped sustain them financially. Joe has said that he always hoped The Queers would sound like a cross between the Ramones and the Beach Boys. This would explain the great reverence for the source material. Much like Screeching Weasel on Ramones, The Queers succeeded by not straying too far from the path. Probably the most radical change they made was opting for cartoony Queers-centric cover art instead of the standard black and white band photo.

This LP featured two thirds of the classic Queers lineup (Joe King on guitar/lead vocals and B-Face on bass/backing vocals) with Hugh Oâ€™Neill missing in action. While itâ€™s not as essential as their Lookout! stuff, itâ€™s a nice addition to their fairly impressive discography. â€œSheena is a Punk Rockerâ€ has even managed to remain a live staple. Of the first three Ramones cover albums it remains the most listenable. Itâ€™s also the one most worthy of revisiting. Unfortunately, Rocket to Russia has bounced from label to label since its initial release, and seems to be out of print at the moment. Cover albums in general are fun to collect, and this one is definitely worth hunting down.