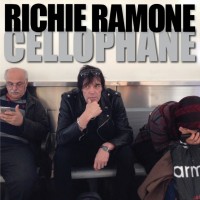 In 2013 Richie Ramone released his debut solo LP Entitled. He kind of came from out of nowhere to reclaim his place in the Ramonesâ€™ legacy. He had previously been the lost Ramone, but his contribution to the band was not insignificant. He drummed for the iconic quartet from 1983 to 1987 and played on Too Tough to Die (1984), Animal Boy (1986) and Halfway to Sanity (1987). He also established himself as a songwriter during that time. He penned six songs for the Ramones, most notably â€œSomebody Put Something in My Drinkâ€.

Cellophane is Richieâ€™s second solo album. Itâ€™s similar to its predecessor, but also manages to show some musical growth. Stylewise, it falls somewhere between the punk of the Ramones and straight up rock and roll. Opener â€œBraggadocioâ€ has plenty of New York attitude and swagger. Richie doesnâ€™t seem to have any lack of confidence. â€œI Fix Thisâ€ might be the best song on the record. Itâ€™s aggressive, catchy and confident. The title track starts slow and builds in intensity. It has a nice, memorable melody. â€œYour Worst Enemyâ€ rages, and is by far the fastest and heaviest thing here.

â€œPretty Poisonâ€ is another catchy song, and is probably the closest to the Ramones in style. On Entitled, Richie re-recorded a couple of songs he wrote for the Ramones. The only cover song on Cellophane is Depeche Modeâ€™s â€œEnjoy the Silenceâ€. It may seem like an odd choice, but the guitar heavy version works. Album closer â€œIâ€™m Not Readyâ€ is the slowest and most personal track, and also features some nice piano work. Richie contemplates his mortality with lines like â€œHeaven can wait/Tell â€˜em Iâ€™m not ready/Iâ€™m already late/Iâ€™m not readyâ€.

On Cellophane, Richieâ€™s band seems to have taken a step forward. A bit of hard touring has transformed them from a backup band into a cohesive unit. The occasional use of bassist Clare Misstakeâ€™s vocals is an especially nice touch. (She was a founding member of the UK based all girl Ramones tribute band The Ramonas.) Whether or not you enjoy this nine track LP will largely depend on what you think of Richieâ€™s lead vocals. He screams, yells, barks and even croons over the course of these songs. His voice is definitely a bit of an acquired taste. Like all the former Ramones solo albums, Cellophane isnâ€™t perfect. Also like most of the former Ramones solo albums, itâ€™s worth a listen.Â

The Ramainz: Live in NYC