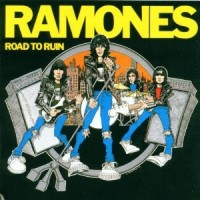 Road To Ruin is the Ramones fourth studio album; it also marks the debut of Marky Ramone on drums. The Ramones were looking to improve their chart success following Rocket to Russia with a slightly more radio friendly offering. Despite the failure at improving sales and radio play, the undeniably more accessible and pop oriented Road To Ruin is not nearly as much of a disappointment to the listeners as it was to the band members themselves.

Road To Ruin features a slick production and sugary hooks in hopes of achieving more radio play in the United States, but lets be honest, the first thing that comes to mind with this record in hindsight is â€œI Wanna Be Sedatedâ€. Everyone recognizes this song, it was an anthem in 1978, and it is an anthem in 2016. It is one of the throw back tracks reminiscent of the Ramones earlier catalogue and one of the strongest standouts on Road To Ruin.

The record has its ups and downs between familiar Ramones territory and more radio friendly rock songs. Despite some criticism about a change in sound, songs like â€œDonâ€™t Come Closeâ€ and â€œQuestioningly" come to mind; the record still flows quite well. The fast Ramones edge still exists with songs like â€œGo Mentalâ€, â€œBad Brainâ€, and â€œIâ€™m Against Itâ€, which helps to keep the slow songs from over taking the record. The sugary pop punk sensibilities of songs like â€œSheâ€™s The Oneâ€ and â€œI Wanna Be Sedatedâ€ work to keep the album feeling fresh along side the slower paced radio oriented rock and roll songs like â€œNeedles And Pins".

Whether you approve of the stylistic shift or not, this era of the Ramones is far and away more appealing than some of the more hard rock influenced material that came in the 1980â€™s. Diehard Ramones fans may curse the direction change, but the band managed to make it work very well. Whether it was about the money or not, Road To Ruin has aged better than most punk rock from this time period, and has continued to be an influential record almost 40 years later.Â